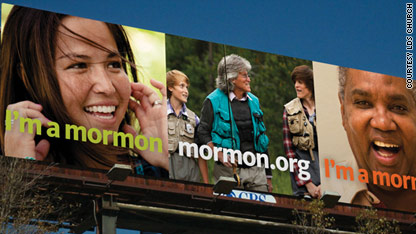 With its "I'm a Mormon" ad campaign, the Church of Jesus Christ of Latter-day Saints looks beyond white guys in black ties.
November 2nd, 2011
04:10 PM ET

Washington (CNN) – The scene at a Mormon congregation here on a recent Sunday would surprise Americans who think of Mormons as young white missionaries in stiff white shirts, black ties and name tags.

Yes, there are white missionaries handing out bulletins at Washington’s Third Ward – what Mormons call their congregations – but there's also Ruth Williams, an elderly African-American woman, decked out in her Sunday best, doing the same.

White, black, Asian and Hispanic Mormons mingle before the service begins. As it gets under way, an African-American tween plays a video game on his smartphone in one pew as a 30-something white woman across the aisle taps away on her iPad.