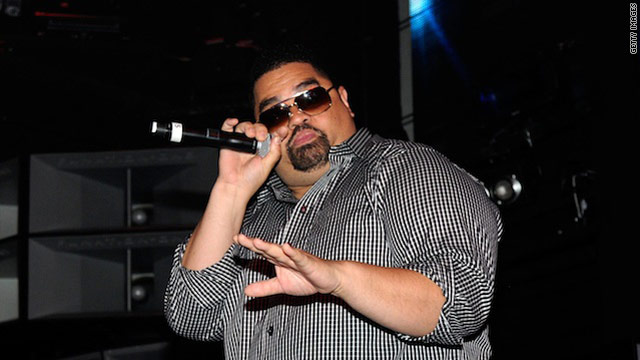 And hip-hop is rife with large-and-in-charge rappers whose size helped catapult them to fame. For some reason, hip-hop fans gravitate to an MC who carries even more weight in life than what they carry on the mic. But it now appears that the same thing that helped make them popular, is leading to their demise.

In hip-hop’s defense, there's widespread fascination with the exalted big man: Chris Farley in comedy, John Goodman in acting, and oh yeah, the rotund guy in red with all the presents in December. But especially in hip-hop, there seems to be an affinity for the exalted “big man” persona.

Even though he didn’t pass because of a heart attack, Biggie grew up six blocks from where I live now and you only need to come to my neighborhood to see his presence on walls and T-shirts, and in car stereos.

This isn't just an image among old school rappers. One of the most popular MCs on the mic is nicknamed “The Biggest Boss” - you know him as Rick Ross. Just a few weeks ago, Ross, estimated to be in excess of 300 pounds, suffered two seizures in one day. Some speculated that his weight was the source of the health problems.

"Anybody that's overweight and obese has an increased risk of heart disease," says Dr. Michael S. Lee, an assistant professor and cardiologist at UCLA Medical Center. "I'm not sure how much exercise or sleep [musicians] get, or whether they get a healthy diet."

Perhaps it’s the combination of the stress of performing on stage and a lifestyle in the fast lane, a bad mix for someone with an expansive waistline.

But some are already wising up. Big Pun’s longtime mentor and large-named friend, the platinum rapper Fat Joe, recently lost 100 pounds this summer. He told XXL magazine, "I’m Fat Joe. I’m still fat. You know the fact is if I didn’t do it for health reasons I would be (censored) 1,000 pounds happy. I love to eat that’s what I do.”

So while Fat Joe is taking steps in the right direction, I'm still disturbed by how many rappers we’ve lost to weight-related health problems. I’ve mourned enough for my favorite rappers who have died victims of violence. Can’t we at least stop the health-related ones?

Are we, as hip-hop fans, partially to blame for always fawning over these larger-than-life rappers? Maybe, but it might hypocritical for me to throw stones as I set down my Little Debbie oatmeal creme pie and my Mountain Dew.

I hope the death of Heavy D causes makes us examine how we put overweight rappers on a pedestal. More importantly, maybe we'll all take a long look at ourselves in the mirror. Like the great group Gang Starr said in one of their biggest hits, “Who’s gonna take the weight?”