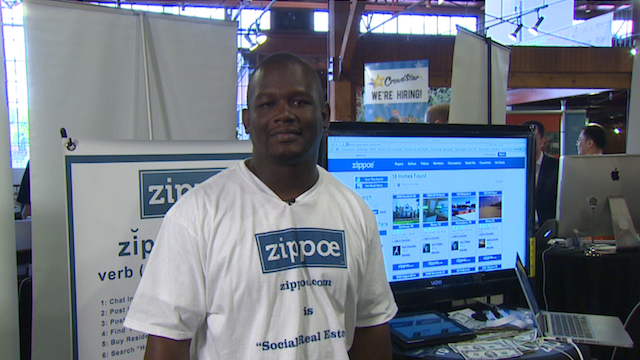 “I think we were the only company there that was comprised of African-Americans,” Onaolapo said.
Low numbers of African-Americans entrepreneurs sparked discussion on blogs and news sites lately. CNN’s documentary, “Black in America: The New Promised Land – Silicon Valley,” which airs at 8 p.m., 11 p.m., and 2 a.m. ET on February 11 and February 12, follows eight black entrepreneurs participating in the NewMe Accelerator.

But the industry is still dominated by young white and Asian-American men, and NewMe is just the first Silicon Valley incubator to focus on African-Americans. Many more black entrepreneurs are like Onaolapo - independently trying to scrape together money and minds to launch their ideas.

“There’s been many times when I’ve been the only African-American in the room, the only one attending certain events,” Onaolapo said. “Of course you get the looks, you get the smirks.”

The lack of diversity is troubling, he said, but he still thinks Silicon Valley is a true meritocracy.

“You don’t have to have an accelerator, but you do need to have a good product that solves a problem,” he said. “If it’s different, if it’s unique, then venture capitalists will be on board.

“Profit is the bottom line. I don’t believe it’s based on your ethnicity or race, who gets funded. I believe it’s driven by the product.”

He was involved with a gang for a few years, and went to jail while in high school for cocaine trafficking, he said, but charges were dropped. He went back to Star Spencer High School, where he parlayed success as a football player into a scholarship to Oklahoma Panhandle State University.

“It was there where my life really began to take a turn for the better,” Onaolapo said.

After struggling academically his first year in college, he began developing his study habits and made the honor roll near the end of his college career, graduating with a degree in finance.

“So after working in the corporate industry for a while, I decided to do my own thing and that’s where the idea for Zippoe was born. I wasn’t really into technology per se,” he said. “I would always look for homes, apartment units and there was an opportunity there to make it much more efficient.”

He met his co-founder, Andreas Parsley, who is also African-American, after college, when  their mutual interest in real estate led to Zippoe.

After outsourcing the technological development to a company in Dallas, Onaolapo and Parsley were ready to bring Zippoe to Silicon Valley.

They scraped together the funds, known as “bootstrapping” in tech jargon, to join the TechCrunch Disrupt conference.

“With all the expenses and all materials and registration fees, I would say the average costs would be $5,000,” he said. “It's definitely worth the investment.”

Looking back, getting away from his old neighborhood’s negative influences put him on the path to success, he said. But he’ll never forget where he came from.

“My younger brother is in the tech space as well, and I kind of speak to the younger generation as often as I can,” he said. “I do some youth ministries [and] definitely try to steer them in the right direction.”

Zippoe is still in development, but Onaolapo hopes it will launch as a website and app in the next couple weeks.

The company is already getting some positive nods, in addition to the all-important venture capital.

“The ideas of his company are pretty remarkable when it comes to the big picture,” investor John Tebeau said. “I look at software everyday, so I really think he has a good direction of where he’s going with this.”

Though he may have chosen a different route than those in the NewMe accelerator, Onaolapo feels they share the end goal of opening more doors for African-Americans in the tech space.

“I believe that we as African-Americans do add value to innovation, but being given that opportunity may be lacking and that’s why I believe they started the NewMe accelerator, to give us a platform to show what we can do in the tech industry,” Onaolapo said.

For Onaolapo, his path from a troubled childhood in Oklahoma City to success in the tech industry is a journey he hopes pays off for more than just himself.

“I think there are many African-Americans that can add tremendous value to innovation and the tech community. Zippoe plans to be a forerunner in making this a reality,” he said. “I wanted to tell my story in hopes of offering inspiration to my African-American brothers and sisters.”