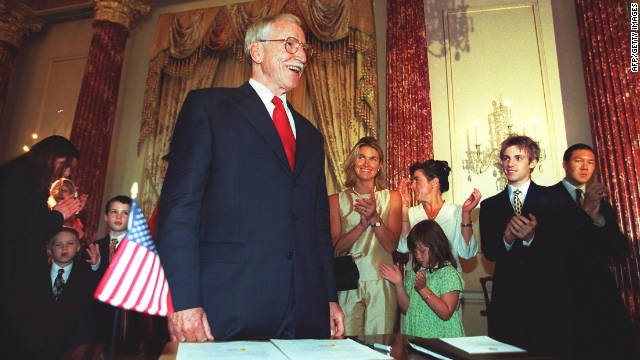 Family and friends applaud after James Hormel, the first openly gay U.S. ambassador, is sworn in as envoy to Luxembourg.
November 16th, 2011
10:57 AM ET

Opinion: Ambassador: Being gay is not a choice

Editor's note: James C. Hormel served as U.S. ambassador to Luxembourg from 1999 to 2000. He recently wrote a memoir entitled "Fit to Serve: Reflections on a Secret Life, Private Struggle and Public Battle to Become the First Openly Gay U.S. Ambassador." He is chairman of the family-run investment firm Equidex.

By James Hormel, Special to CNN

When Shorter University in northwest Georgia recently informed its 200 employees that they had to sign a "personal lifestyle pledge" requiring them to reject homosexuality or lose their jobs, school administrators underscored a staggering injustice: In 29 U.S. states, people can still be fired for being gay.

While same-sex marriage and other equality debates soak up political and media attention, the Employment Non-discrimination Act, a 37-year-old bill, languishes in the U.S. Congress.

Without that federal law, a majority of our states condone job, housing and other discrimination based on sexual orientation. An even larger number - 35 - have no protections for transgender people.