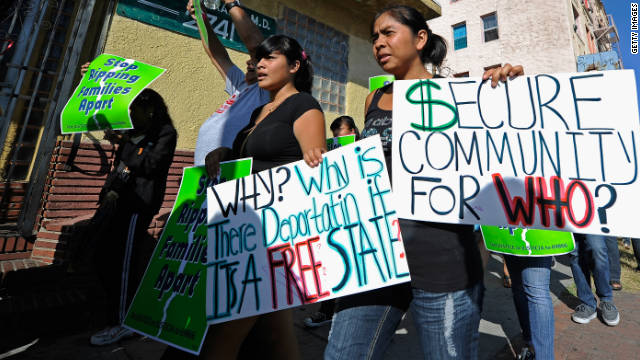 The Obama administration says it will drop cases against immigrants with no criminal histories.
November 17th, 2011
06:12 PM ET

By The CNN Wire

(CNN) - The Obama administration said Thursday it immediately will begin reviewing all new immigration cases to make sure they comply with administration priorities - which focus on pursuing cases involving criminals who endanger public safety or national security, while dropping cases against immigrants with no criminal histories.

Beginning December 4, officials will begin to apply the same criteria to the backlog of some 300,000 deportation cases pending in federal immigration courts, beginning with courts in Baltimore and Denver.

The policy was touted by administration officials as "smart and effective immigration enforcement."

Immigrant communities have long sought the change, but critics blast it as a "backdoor amnesty program."

The new policy gives immigration officials guidelines on which immigration cases to pursue, with the highest priority being on people who pose a danger to public safety or national security, or who are egregious immigration law violators. Enforcement officers are being instructed to pursue those cases.

The guidelines also list factors that officers should consider when deciding to "administratively close" or "stay" a case. Among them: whether the immigrant arrived in the United States at a young age, whether they served in the military and whether they are providers for their families.

The changes are being phased in.

Beginning immediately, according to an Immigration and Customs Enforcement official, attorneys will begin reviewing all incoming and certain pending cases to ensure they conform with ICE's enforcement priorities.

Then, in December, the government will launch a six-week pilot program in Baltimore and Denver to test the process for reviewing cases pending before the immigration court.

ICE has launched a training program on the appropriate use of prosecutorial discretion, ICE said.

"They are implementing a backdoor amnesty program here without authorization from Congress," said Ira Mehlman, spokesman for the Federation for American Immigration Reform. The guidelines "basically... amounts to a 'how to' guide to illegal aliens and their attorneys on how to avoid being deported from the United States."

Mehlman said it makes sense for ICE to give priority to the most serious offenders, but said it is wrong to ignore lesser violators.

"Every law enforcement agency in the world sets priorities, but that doesn't mean they avoid enforcing other laws," he said.