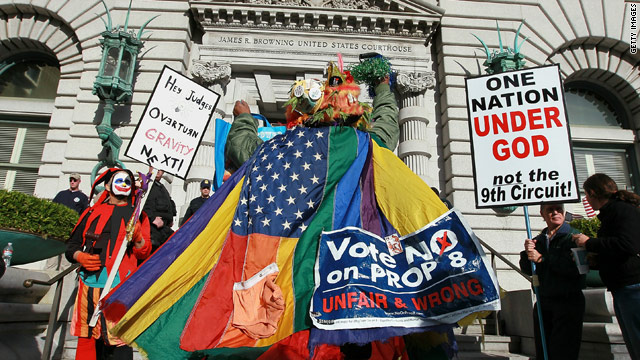 (CNN) - A complex legal fight over the constitutionality of same-sex marriage is back on track after California's highest court on Thursday allowed an appeal over a controversial ballot initiative to move ahead in federal court.

At issue is Proposition 8, a voter-approved measure that would recognize marriage only between one man and one woman. A federal judge had earlier struck down the law as a violation of equal protection, prompting an appeal to a higher court.

The sticking point was who would defend "Prop 8" in court, after the state's top officials– including the governor and attorney general– refused to do so. A federal appeals court had asked the California Supreme Court to weigh in and decide whether supporters of the law - called the "official proponents" - could take the place of state officials.

In its ruling Thursday, the state high court said yes.

"Neither the governor, the attorney general, nor any other executive or legislative official has the authority to veto or invalidate an initiative measure that has been approved by the voters," said the court's majority. "It would exalt form over substance to interpret California law in a manner that would permit these public officials to indirectly achieve such a result by denying the official initiative proponents the authority to step in to assert the state's interest in the validity of the measure or to appeal a lower court judgment invalidating the measure when those public officials decline to assert that interest or to appeal an adverse judgment."

The initiative was approved by voters in 2008.