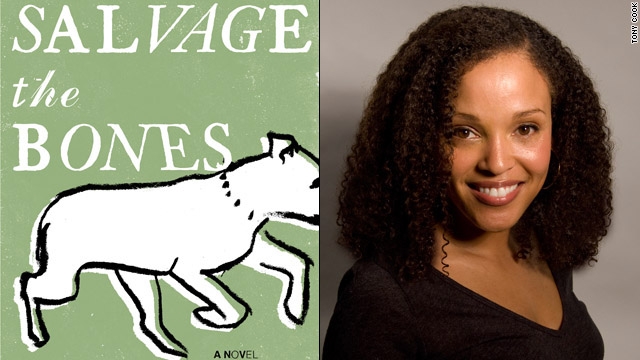 Dallas (CNN) – Jesmyn Ward stunned the literary world Wednesday night when her novel “Salvage the Bones” won the National Book Award for fiction. Ward was considered a long shot, at best, to win the prestigious award.

Before the nominees were announced in mid-October, Ward’s novel didn’t generate much publicity. The 34-year-old author was convinced her novel would be “lost in the sea of books.”

Now, people are paying attention. One critic says Ward's novel “has the aura of a classic.”

“Salvage the Bones” tells the story of a poor black Mississippi family struggling through life in August 2005 as Hurricane Katrina is about the strike the Gulf Coast. In one of the few reviews of the book in a major newspaper, The Washington Post praises Ward for her honest depiction of life in her home state of Mississippi.

“Without a hint of pretension, in the simple lives of these poor people living among chickens and abandoned cars, she evokes the tenacious love and desperation of classical tragedy,” the newspaper's review states.

Ward grew up in DeLisle, Mississippi, and is a Hurricane Katrina survivor. She worked on “Salvage the Bones” for three years. The book is her second novel.

She teaches at the University of South Alabama and is working on her next book, tentatively titled “Men We Reaped,” a memoir of living in her hometown as five young black men died, including her brother, who was killed by a drunken driver.

Exhausted after a night of celebrating her National Book Award honor, Ward talked to CNN's Ed Lavandera about what the award means to her and how a family tragedy helped persuade her to become a novelist.

CNN: Were you surprised that your novel “Salvage the Bones” won the National Book Award?

Jesmyn Ward: I was totally surprised. I was shocked. I had prepared an acceptance speech, just in case, but I did not think that was going to happen at all. I kept telling myself, just breathe, breathe, keep breathing and you’ll be fine.

CNN: What does this award mean to you?

Ward: I haven’t even processed what it means to me yet. I began looking at the list of past finalists and past winners; all the writers on those lists are amazing, and many of them - I’ve loved their work and they’ve been idols to me for a long time. So to be in the same company with writers of their stature amazes me, and I think that’s why I haven’t processed it yet. It’s overwhelming.

CNN: I couldn't find any reviews of your book in major newspapers across the country or much talk about your book before it was nominated for a National Book Award. Did you feel like your book was being ignored or lost?

CNN: What is it about your novel “Salvage the Bones” that resonated with the judges?

Ward: I think the characters resonated with the judges - they were real and alive on the page, and because they were experiencing this hurricane. … The characters became real for them on the page even before the hurricane entered the picture, and then … you introduce the hurricane into the narrative. I just think that was compelling and they saw these characters as real people. It was a story that needed to be told.

CNN: Like the characters in your book, you grew up as a poor black girl in the South. Is this book autobiographical in any way?

Ward: There are three things that I draw from my life that are included in this book. One is that the book is set on the Mississippi Gulf Coast, in a small, rural black community, which is the kind of community I come from. Two, the characters experienced Hurricane Katrina. I was home for Hurricane Katrina, so I had some of my experience to draw from. It was like firsthand research. But the characters’ experience in the storm is totally different from mine. And the third thing is actually the dogfighting. When I was younger, I actually witnessed some dogfights. The other things the characters experienced throughout the book [are] purely fictional.

CNN: How has growing up on the Mississippi Gulf Coast influenced your writing? Why did you want to take readers to this place?

Ward: I have a love-hate relationship with home. There’s so much I love about home, but then there’s a lot that I can acknowledge that I dislike about home. And acknowledging that to myself helps me see that place more clearly and to bring readers to that place. I just think these stories are worth being told and these people are worth being written about. I think our stories are universal stories. In the end, it’s about us as human beings trying to survive and make the best of what we have right here, right now.

CNN: You talk about being bullied when you attended public school by black classmates and, when you started at a mostly white private school paid for by your mother's employer [her mother worked as a maid for wealthy white families], you were bullied because of the color of your skin. You've said some students even threatened to lynch you in the hallways. This must have great impact on your writing.

Ward: That’s one of the reasons that I can acknowledge that there’s much that I love about Mississippi and growing up there, but that there’s also much that I hate. The bullying I experienced, much of it revolved around race. Having that history made me want to write about those things, to write about the sort of people that I write about, so that the types of people I went to school with who saw us not as human beings, but as less than human beings, would read my stuff and then would see us as human beings. At least that was my hope.

CNN: Your brother was killed at the age of 19 by a drunken driver. You’ve said his death really inspired you to become a writer. Can you explain that?

Ward: We were very close. I didn’t realize until after he died that all these things we had shared, that I could tell those stories and have them remember and understand. As I was trying to live through the grief after he died, his dying taught me that we aren’t promised anything, that tomorrow might not come. So understanding that reconfigured things for me and made me think about, with the time I have left, what can I do that would make this life worth living and give my life meaning. And for me, that was writing.

CNN: At what age did you start focusing on writing?

Ward: I didn’t start really focusing on writing until I was 24. I’d always loved reading. I dabbled in writing, wrote really bad poetry in high school. I also took a few writing classes when I was an undergrad at Stanford. I was so intimidated. I felt like I didn’t have the chops to do well in the writing workshops in the classes, and I didn’t think I was a good enough writer, so I didn’t take many creative writing classes while I was there.
But after I graduated and my brother died, it made me focus on sort of realizing and making a serious attempt at what I always secretly wanted to do but never had the courage to do.

CNN: “Salvage The Bones” is really the story of siblings. Is that important to you?

Ward: There are things that happened in this book that surprised me when I wrote them. The development of that relationship between those kids, I didn’t know that was going to be as important in the book as it was. I didn’t realize it was going to be such an important theme in the book. I loved that relationship the siblings had. I was interested in the different tensions. Nothing about their relationships is perfect. Sometimes they lie to each other, sometimes they misunderstand each other, but still in the end, those relationships endure.