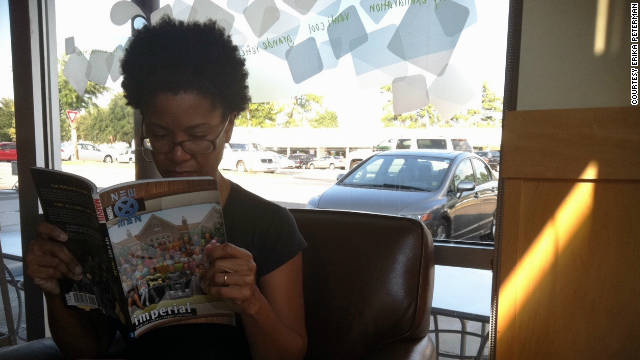 Growing up, Erika Peterman felt like the only African-American girl geek out there. That's changed.
November 18th, 2011
05:11 PM ET

Editor's note: Erika Peterman is a writer and editor who lives in Tallahassee, Florida. She blogs at girls-gone-geek.com and is a regular contributor to CNN's Geek Out blog.

It was a long time before I let my nerd flag fly proudly, though in retrospect, my status couldn’t have been more obvious.

When I was a kid, “Star Wars” and comic books were the center of my universe. I loved George Lucas’ original trilogy so much that when I started playing the flute seriously in junior high - yeah, I was a band geek, too - I spent evenings listening to John Williams and the Boston Pops so I could teach myself to play along. I happily built literature-themed dioramas, and wrote short science fiction stories and bad poems in my gifted classes. In my case, pretty much every nerd stereotype applied, right down to the thick glasses.

None of this would have been unusual had I not been a black girl growing up in a small southern Georgia city in the 1970s and ’80s.

I knew boys, black and white, who were nerdy, including a neighbor, whose "Star Wars" action figure collection I coveted. But if there were any other “Justice League”-loving girls who looked like me, either in my working class neighborhood, at church or at school, they must have been deep in hiding. I knew other black girls who were nerds in the academic sense, but that’s where we parted ways. I was the full package of geek, and a double minority in that subculture, to boot. I stuck out like a sore thumb. Maybe because my parents were bookish opera lovers, they never suggested that I was weird, and I’m forever grateful to my mother for feeding my comic book habit so steadily.

But by pre-adolescence, I had internalized a lot of ideas about what it meant to be black, from the music to listen to, to the people to hang out with, to the hobbies to practice. It didn’t matter that the rules were bogus or perpetuated by people who were insecure about their own identities. All I knew was that my unintentional eccentricity played a role in making me a target, and not in the general you're-a-dork way but the you’re-a-dork-and-you’re-too-white way.

Geek Out: What it's like to be the only black nerd in the room

Maybe it would have been less of an issue if I’d grown up in a large city, or if I’d been born in the late '80s or '90s, but in the time and place of my youth, there didn’t seem to be a category for someone like me. So I went underground for a time. I certainly didn’t stop being a nerd; I just got a lot better at keeping certain things to myself.

By the time I went off to a historically black university in the late 1980s, I decided that my geekier tendencies were best shared on a very limited basis. I didn’t go to college so much to find myself as to be more like the person I thought I ought to be. Only my closest friends really knew the girl underneath the sorority jersey was a raging nerd who would take ’60s pop over new jack swing any day.

Only one of them ever went with me to the store near campus that sold comics.

Maybe time will prove me wrong, but if my kids turn out to be nerds — and my son is well on his way — I doubt that they’ll have to wrestle with the same issues that I did. It’s a different time, one where ideas about racial identity are thankfully less rigid. They’re also growing up in a suburban environment where the 12-year-old me wouldn't have stood out much.

I put on a decent act for a while, but my authentic self eventually emerged with a vengeance. I’m glad she did because, in an unexpected turn of events, my friends now consider my geek status to be kinda cool. Just a few months ago, another mom asked me to take her then-10-year-old son to the comic book store to show him around and help him pick something out.

Being a nerd has always been a big part of who I am; the only difference now is that I think it’s something to celebrate, not tamp down. I wear my "Star Wars" and Wonder Woman T-shirts in public with no shame, and they’ve earned me a high-five or two. When I see other black women in full costume Dragon*Con — and there are far more than I once thought — it does my heart good to know that I’m not alone. Maybe I never really was.

The opinions expressed in this commentary are solely those of Erika Peterman.