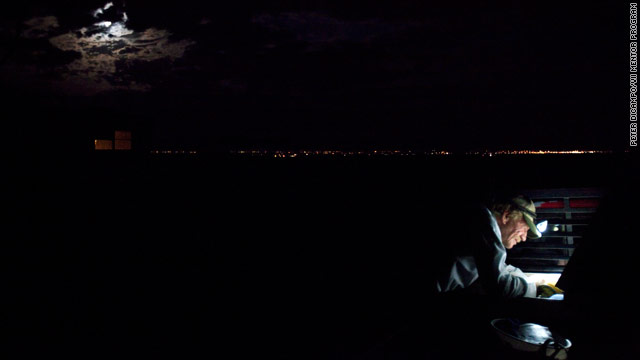 Nights are extra-dark in one settlement outside of Albuquerque, New Mexico.

Several hundred people live there, but the brightest lights are several miles away, or come from a full moon.

Most of the people in New Mexico's Pajarito Mesa have low incomes, but they jumped at the chance to own their own land, even if it came without some of the things you’d find in a modern subdivision. Because the land they bought wasn’t zoned for housing, they live without many of the trappings of municipal life, like roads, hookups to water and sewer service or access to the power grid.

Instead, many scrape by with improvised solutions: propane stoves, generators, flashlights, ice coolers, candlelight, and, for a few that can afford it, solar panels or homemade wind turbines. The city of Albuquerque recently installed a water pump in the community, but residents still must fill tanks or buckets and then haul them to their homes.Photographer Peter DiCampo spent four weeks in 2010 and 2011 capturing images of what it’s like to live there – in a community where, if you want electricity, you have to provide it yourself.

DiCampo examines the lives of the 1.4 billion people worldwide who are living without access to electricity, according to the International Energy Agency. Most are living in sub-Saharan Africa or Asia, and DiCampo recently launched a Kickstarter campaign to help fund photography in more places.

But DiCampo's latest installment focuses on a tiny sliver of that number living in New Mexico .

Drawn by affordable land and open spaces, hundreds of families have settled on small plots and sub-plots on the mesa in the last three decades. An estimated 300 families live there, but it’s difficult to get an accurate count because the community, just  a 10 minute drive from downtown Albuquerque, doesn’t officially exist. Most but not all of the families are of Mexican or Chicano descent, and while some are immigrants, some have lived in the United States for years.

DiCampo said living without electricity ends up exacerbating the effects of poverty, because some of the workarounds needed to make life work are more expensive than obtaining electricity directly.

“Economically, it’s a real burden,” DiCampo said. “One of the main families I stayed with was using [gasoline-powered] generators. They would run out of money to then buy fuel for their cars to go fetch water. It’s all related.”

Carlos Proffit, who moved to Pajarito Mesa in 1985 with only a camping trailer, has gradually managed to build his own zero-energy home, run entirely on wind, solar and battery power. He built everything by hand, over several years, but is now energy self-sufficient.  He estimated the whole setup cost him a few thousand dollars. He recognizes that he might be more fortunate than some of his neighbors.

“The rest of the community, if you can pony up the money, it’s the best money you’ll ever spend, but it’s hard to get that money up front,” he told DiCampo in an interview.