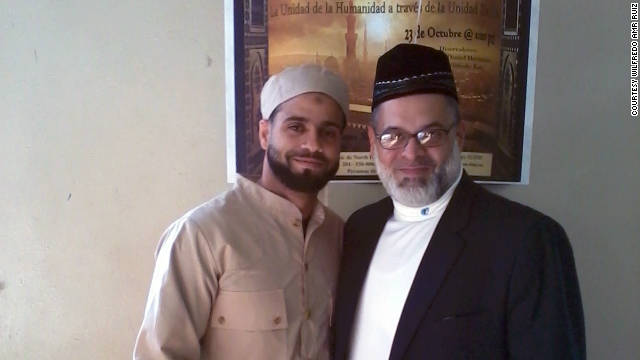 Puerto Rican lawyer Wilfredo Amr Ruiz, right, is among the thousands of Latinos who have converted to Islam.
November 23rd, 2011
04:23 PM ET

Wilfredo Amr Ruíz, is a lawyer, commentator on international politics and former U.S. military chaplain from Miami. He's also a Muslim, one of a small and growing number of Latinos who have converted to Islam.

He spent most of Monday fielding interviews and requests from radio shows that wanted to talk about the Latino Muslim community. The flurry of interest was spurred by the weekend arrest of Jose Pimentel, a Dominican Republic-born convert to Islam, on terrorism charges. Pimentel is one of several Latino Muslims to face terrorism-related arrests since September 11, 2001, including Jose Padilla, Bryant Neal Vinas, Daniel Maldonado.

He wished Islam had been in the spotlight for a more positive reason, he said, one that's closer to the true day-to-day of most Latino Muslims.

“I just came from a TV interview where they asked me, ‘What about this trend of Islamist Latino Muslims?’” Ruíz said. “There is no trend. If it’s a trend, then [there would be] a lot of people following it. If something’s a trend, talk about the people who have left behind crime and are living a pious life after becoming Muslims.”

A 2011 survey by the Pew Forum on Religion and Public Life estimated that there are 2.75 million Muslims in the United States, and a 2008 survey found that about 4% of America’s Muslims identify as Latinos. There are predominantly Latino Muslim congregations in several cities, including Atlanta, Los Angeles, Chicago and the Bronx.

There are few statistics about Latino Muslims, but anecdotally, many convert to Islam as adults. Some change religions after becoming engaged to or marrying a Muslim; some find a home in Islam after becoming dissatisfied with the faith they were born into; some are attracted to the faith while serving in prison; still others stumble upon it after reading a book or attending an interfaith event.

Ruíz converted with his wife and children about eight years ago. His twins were toddlers then, and he and his wife were discussing whether they – non-practicing Catholics – should start attending church again.

“Out of the blue, we were having this conversation, and we were driving next to an Islamic center in Puerto Rico,” Ruíz said. “So I said, ‘You know, we should start thinking about Islam.”

Ruíz looked into some pamphlets about Islam that his mother had brought home from a Palestinian storekeeper. That led to several visits to Islamic centers and in 2005, he decided to put his career as a lawyer on hold while he got a master’s degree in Islamic studies and Muslim-Christian relations from the Hartford Seminary in Connecticut. Shortly afterward, Ruíz, a former Navy Judge Advocates General's Corps member, become a Navy chaplain. He’s also co-founder of Puerto Rican Muslim Association.

Islam also changed the course of Nahela Alexandra Morales’ life as well. She converted to Islam five years ago and is now the national coordinator for the Islamic Circle of North America’s  Hispanic Outreach Program in New York. She said she's frustrated that coverage of Latino Muslims spikes when  an individual is accused of something bad. But when American Muslims donated millions of dollars to earthquake relief in Haiti, or her organization supported food pantries and school supply drives, the media failed to pay much attention, she said.

"One of the major problems out there is the misconception of when the news breaks, unfortunately, they always target the religious status when it is a Muslim. Add Latino to that and it makes bigger news," Morales said.

Morales said she began looking into Islam out of curiosity after September 11, 2001. The peaceful religion she encountered was at odds with the violent extremes portrayed in the headlines. She began taking weekly classes, and a few years after making the Shahada - the Islamic declaration of faith – she married a Moroccan man and is happily raising her children to be Muslims.

At first, her family had mixed feelings, which came to a head when she visited them in Mexico City – wearing a headscarf.

“It was a shock  I had cousins that said they feel betrayed. One told me I’d never be an Arab,” Morales said. Looking at her covered head, her grandmother somewhat jokingly asked, “Well, if you wanted to be a nun, why didn’t you tell me?”

But any feelings of uneasiness have been replaced by, at the least, acceptance. Morales’ mother converted last year, and two of her cousins are considering conversion.

“I’m not afraid to speak up for my religion or my race. I’m proud of being Mexican,” Morales said.

Ruíz has also put a lot of time and effort into explaining and defending his faith within and outside of the Spanish-speaking community, he said. He’s appeared on CNN en Español, Telemundo and Univision, and is a regular columnist for El Diario de NY and writer for Huffington Post.

Ruíz sees the fact that Pimentel was unable to gain any financial or direct logistical support for his plot as proof that the overwhelming majority of Muslims would not find his ideas attractive.

“Even if he started talking about this, he would be denounced to the authorities, because there’s a lot of work done by a lot of Muslim organizations, because we don’t want that kind of crap going on in our Islamic centers,” Ruíz said.

Morales said there is guidance available for "reverts" – those that have "reverted" to the original state of submission to God that Muslims believe all people are born with. In one of the Islamic Circle’s programs, new Muslims are paired with someone more experienced in the faith. It also offers a hotline and online classes for people with questions about Islam through WhyIslam.org.

“We try to educate them. We try to be accessible,” Morales said. “So any questions they do have, they have someone to go to. We try to educate our reverts and keep them on point for what the religion is about and not try to deviate or go to any extreme group.  We try to keep them under the one Islam.”