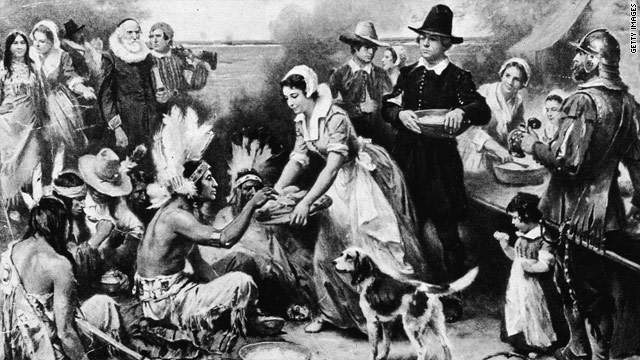 For many Americans, Thanksgiving means turkey with all the fixings, spending time with family, and being grateful for the blessings of the year. But for many Native Americans , the holiday is a bit more complicated.

The introduction of European settlers to the Americas had a mostly tragic outcome for many indigenous communities. They lost land to people who distrusted and disrespected their way of life. They lost millions of people to territorial conflict, starvation and diseases brought from Europe. Their cultures were misunderstood, devalued and deemed inferior. Some think the traditional Thanksgiving narrative – generous Pilgrims, helpful Indians – implies Native Americans should be grateful about the events that led to their suffering.

Mahtowin Munro is co-leader of United American Indians of New England, which organizes a National Day of Mourning each year on Thanksgiving. The event began in 1970, as a way to memorialize indigenous people who died as a result of colonization and to protest continued discrimination and exploitation.

The goal: Offer an unvarnished view of what the archetypal Thanksgiving celebration meant for those who lived in America when the Pilgrims landed.

“We do a National Day of Mourning to talk about this and just to say, ‘You need to stop teaching this to your children, and having this false mythology,’” Munro said. “The idea is that the Pilgrims had this bountiful harvest and decided to share it and they invited the Native Americans and everybody lived happily ever after. The Native Americans definitely didn’t live happily ever after.”

The mourning day events typically kick off with several hundred people, Native American and not, gathered on Plymouth’s Coles Hill, near a statue of Massasoit, the leader of the Wamponag tribe who lived in the area during the Pilgrims’ settlement. A spiritual ceremony with smudging of sacred smoke and prayer follows. Next comes a speak-out, in which Native Americans talk about past or present issues in their communities. Then there’s a march through old Plymouth and a social, where many of the attendees who have been fasting in memory of their ancestors break their fast with a meal that could include anything from turkey to moose stew to vegan fare.

“It’s really a day for non-Native people to listen,” said Munro, who is a member of the Lakota tribe. “Every other day of the year – in this society, we’re not even a presence. We’re relegated to being an asterisk or not even counted or being a joke, like a sports team mascot.”

Christopher Paul Moore, a Lenape tribal elder who lives in New York City, recognizes the history associated with Thanksgiving, but also uses it as an opportunity to gather with family and be thankful. His Thanksgiving menu is like many others –turkey and stuffing - but also corn pudding and perhaps some wild game.

Moore, a historian and curator at the  New York Public Library’s Schomburg Center for Research in Black Culture, said it’s a time for “keeping in mind not only the fruits of the earth but the water, the soil, the air we breathe.”

“It’s not just human beings and [being thankful that] we’ve got some food for our tummies, but it’s also for the tummies of the wild animal world; and the sun, the moon, the earth will all be part of that observance,” Moore said. “We will go to Manhattan Island and just have some time of thanks, to have some time with our ancestors. To be thankful not only for our ancestors, but for America, and thankful we’re still here.”

For J. Lucy Boyd  having a Native American point of view of Thanksgiving is fairly new. She didn't know her grandfather as she was growing up, and learned only six years ago that he was Cherokee. Soon after, she became an official member of the United Cherokee Ani-Yun-Wiya Nation. Boyd's Thanksgiving means sharing with others and enjoying the bounty of the season – something she finds completely compatible with her recently discovered Native American heritage.

“The Native Americans had an end-of-harvest celebration before the Pilgrims came. I don’t see any reason not to celebrate it today,” Boyd said. “I have more reverence for the plants, the animals, the things that sustain us.”

Boyd, a psychiatric nurse and author in Lakesite, Tennessee, will be sitting down to two Thanksgivings this year – one with her children and grandchildren, and another with her mother and grandmother – "one with the descendants, and one with the ancestors."  They'll be eating what many would call a standard holiday meal with ham and turkey. But next year, Boyd hopes to include some Cherokee recipes.

"Thanksgiving is for everybody," Boyd said. "It doesn’t belong to any one group, it belongs to all of us."