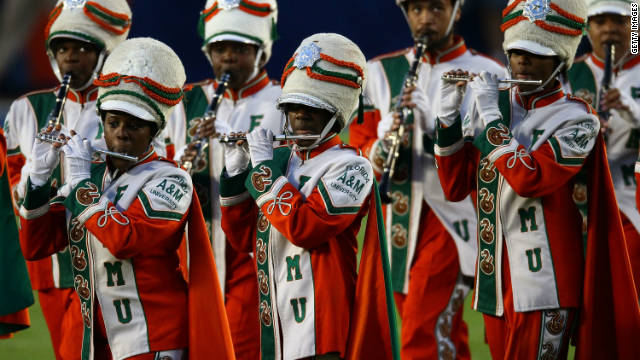 His pride is shaken, but "I love that band and its people, past, present and future," former band member Dereyck Moore writes.
November 24th, 2011
03:10 PM ET

Editor’s note: Dereyck Moore is currently employed by NBA digital and previously worked for CNN Digital. Moore is a graduate of Florida A&M University. He was a member of the FAMU Marching 100 band from 1990 to 1994

By Dereyck Moore, Special to CNN

(CNN) - The tragic death of Robert Champion, drum major for the famed Florida A&M University marching band, weighs on me. I never knew Robert personally. I never shook his hand or carried on a conversation with this young man. But his death has touched me as if I had lost a member of my immediate family - because I have.

I was a member of the FAMU band 20 years ago, and the news of his death traveled among my band mates, through those who marched before me and long after I was gone. It’s sad and shocking to hear his death might be related to hazing by members of the band.

I have always looked upon my beloved FAMU Marching 100 band and many other historically black college and university - HBCU - marching bands with pride. That pride has been shaken to its core by the investigation into the death of a member of our family, my family - a young man just like me.

As a junior in high school in New Orleans, I was a percussionist in the marching band and I knew I wanted to continue the experience. The decision came down to two HBCU band schools - Southern University in Baton Rouge, Louisiana, and Florida A&M University in Tallahassee, Florida.

While both had reputable communications programs - my intended major - Southern University was the obvious, easy choice. I knew the school, loved its band and had dozens of friends going there. The family history at the institution was strong. My father was a member of the university’s band.

Children grow to know, love and idolize HBCU marching bands just as young athletes look upon the NBA or the NFL. It may sound foreign to some, but for an aspiring African-American high school musician, the college of choice can boil down to one core attribute: Whose band is the best?

Many other bands were good, but the FAMU Marching 100 was great. I aspired to be involved in the synchronized steps and well-tuned notes that made half-time the most important part of any game. To see them perform was such a different experience that I knew that's where I wanted to go. That was the uniform I wanted to wear, even if it was 385 miles from home, even if I lacked scholarship money and saw out-of-state tuition costs staring me in the face. I had to be in that number.

After being accepted, I knew I was among an elite class of musicians that practiced and performed like no others. But as an incoming freshmen and auditioning percussionist, I was “shaken off the tree.” That meant I didn't make the first cut on my instrument for the season’s first game, and would have to challenge other players for a spot in the ranks.

Eventually, I challenged a fellow freshman and won. I was rewarded with a position on the field.

Two months later, I was chosen as rank sergeant, which led a team of percussionists onto the field during in the season's final performance against rival Bethune-Cookman University. I had done it.

With sweat and tear, I had achieved my goal. Many members of the Marching 100 could tell you a similar story of their determination to not give up, to be dedicated to the undertaking, to have the fortitude to make it on the field. The band's rich traditions of hard work and dedication preceded me, and it was up to me to uphold the strength of that reputation, to carry it forward every time we took the field.

As a member of the FAMU band, I marched down Pennsylvania Avenue for President Clinton's 1993 inaugural parade and signed autographs after performing two halftime shows for the citizens of the Bahamas. I was thrilled to excited audiences with our signature mix of precision, musicianship and well-crafted showmanship. We practiced for hours with attention to every detail. Work ethic was a key takeaway from the hundreds of thousands of applauding fans and miles of travel in between.

Out of the adversity blossomed self-esteem and improved confidence. Nothing was inconceivable or unachievable. If I could make it as a member of the Marching 100, I could do anything.

For an 18-year-old African-American male growing up in a society where there are more of us in penal institutions than in institutions of higher learning, the "I can do anything" ideal is worth its weight in gold.

Based on my own experience, I'm sure Robert believed there was nothing he couldn't accomplish. That Robert became a leader, a drum major, is a testament to his will and determination. He was among the best of the best musicians, but rose even higher. I pray for this young man's family and their struggle to move forward.

I love that band and its people, past, present and future. I was taught to love it not through repeated beatings or adverse physical punishment, but through the examples of great musicians to my left and right.

When attending FAMU games, I'm glad to see old section leaders, staff members and band mates, even if we weren’t close while we were actually in the band. On sight, we greet each other as old relatives at a family reunion. I hug their kids and they hug mine. Every member of the Marching 100 is family based on the bond we built working our hardest to achieve a common goal.

The death of Robert Champion represents a loss of a part of all of us - all of us who wished to better ourselves by becoming a part of a greater whole. We may no longer wear the uniform and march in step with the band, but long after we have gone, we hear the drum beat of the ideals we learned. I will hear it the rest of my life.

The opinions expressed in this commentary are solely those of Dereyck Moore.