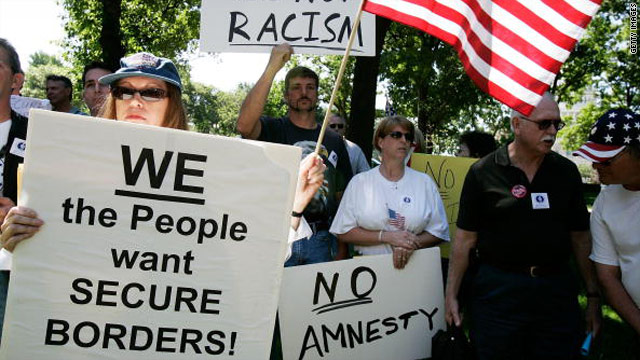 The term "anchor baby" is sometimes used by those against automatic citizenship for all children born in the United States.
December 8th, 2011
12:22 PM ET

Editor's note: This story contains language that some readers may consider offensive.

The first new edition of the American Heritage Dictionary in 10 years contained 10,000 new entries – and one of them in particular caused a flurry of protest among immigrant and Latino advocates.

The fifth edition of the dictionary defined the term “anchor baby" as  “A child born to a noncitizen mother in a country that grants automatic citizenship to children born on its soil, especially such a child born to parents seeking to secure eventual citizenship for themselves and often other members of their family.”

The original definition did not include any indication that many people the term is offensive, as it does for words such as “nigger” and “spic.”

Immigration Impact, a group that that advocates for the rights of immigrants, first covered the word’s inclusion on its blog on December 2 and pressed for a change that would reflect the “poisonous and derogatory nature of the term.”

After reading the post, the executive editor of the dictionary, Steve Kleinedler, agreed that the definition needed to change.

The current wording was added to the online dictionary on Monday. It flags the word as “offensive” and defines “anchor baby” as being “used as a disparaging term for a child born to a noncitizen mother in a country that grants automatic citizenship to children born on its soil, especially when the child’s birthplace is thought to have been chosen in order to improve the mother’s or other relatives’ chances of securing eventual citizenship.”

Kleinedler told Colorlines, a blog that reports on issues of race, ethnicity and social justice, that changing the word was more about accuracy than outrage.

“Personally, this was not a reaction that we have to fix it because people are angry,” Kleinedler told Colorlines. “We fixed it because we were wrong. And I, as the executive editor, acknowledge the fact that this was an error and I take responsibility for that.”

This isn’t the first time that a dictionary definition has caused controversy. In 2003, the Merriam-Webster Dictionary added a second meaning for the word “marriage” that included same-sex couples “in a relationship like that of traditional marriage,” which offended those who believed the word should only be defined as describing a relationship between a man and a woman. The dictionary did not change the definition.

But in 1998, Merriam-Webster altered its definition of the word “nigger” after it was the focus of a letter writing campaign. The definition shifted from “a black person … usually taken to be offensive” to one that emphasized the offensive nature of the term.