The statistics of violent crimes against Native American women are grim: One in three Native women will be raped in her lifetime, according to the  U.S. Department of Justice. Three in five will be physically assaulted.

But a recently introduced Senate bill would try to improve their chances of prosecuting their attackers. If passed, it would allocate funding and a devote more resources to survivors.

The Stand Against Violence and Empower Native Women Act, known as the SAVE Native Women Act, is under review in the Senate’s Committee on Indian Affairs. Introduced in October by Senator Daniel K. Akaka, a Democrat from Hawaii, the bill aims to fund more services for assault victims and give authorities more tools and clearer guidelines on how to bring cases to court.

There's a direct link between the higher risk of violence against them and impunity for offenders, said Rachel Ward, who co-authored a 2007 Amnesty International report, “Maze of Injustice: The Failure to Protect Indigenous Women from Sexual Violence in the USA."

"Certainly when you look at the fact that Native women are disproportionately more likely to be victims of domestic or sexual violence, it’s in no small part due to the jurisdictional maze that has been perpetrated, allowing perpetrators to get off scott free," Ward said.

END_OF_DOCUMENT_TOKEN_TO_BE_REPLACED

A Macy's employee in Texas,  Natalie Johnson, claims she was fired for preventing a transgender customer from changing in the women's fitting room.

"I made sure to keep an eye on him because he was shopping for women's clothing," remembered Johnson.

Johnson told CNN affiliate KSAT that she has filed a complaint saying that her religious beliefs prevent her from recognizing transgender people. 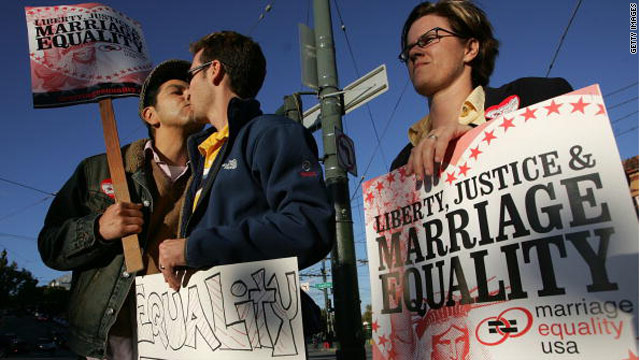 The appeals court is reviewing Judge Vaughn Walker's August 2010 decision that Proposition 8 violated the right to equality in marriage.
December 9th, 2011
11:40 AM ET

Shifting Gears: Oprah's OWN will cater to African American audience – The Hollywood Reporter