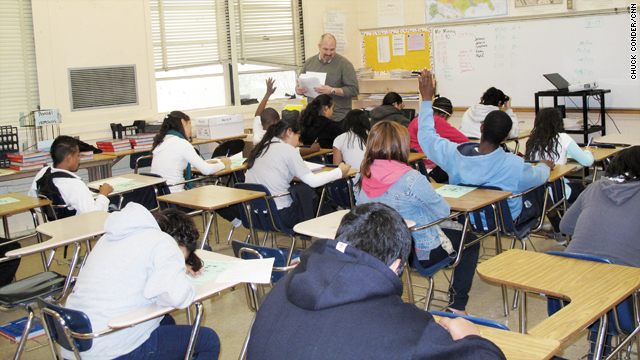 But it is not without controversy. Some opponents have religious objections, others say it’s part of sex education and belongs at home not in schools.  Others simply don’t want this taught to their children.

So far, opposition efforts to repeal the law, which passed last summer, have failed. There are currently at least five initiative measures awaiting review by the attorney general that could make their way on the ballot for next year's election, but it’s too late to stop the law that takes effect next month. If any of the ballot measures pass, they will undo the curriculum that is already in place.

Although individual teachers, like Taklender, have innovated LGBT studies, there aren’t any system-wide models for districts to duplicate, said Jill Marcellus, a spokeswoman for the Gay-Straight Alliance Network.

The Gay, Lesbian & Straight Education Network’s 2009 National School Climate Survey found that about 13% of students were taught in a positive way about lesbian, gay, bisexual or transgender people in any of their classes.

Scott Hirschfeld, director of curriculum at the Anti-Defamation League, said kids can go from kindergarten through 12th grade without ever learning about an LGBT person.

“They are really getting an incomplete history,” he said. “The reality is that in most schools this is not a standard part of curriculum.”

In California, many schools have taken a wait-and-see approach, but not the Los Angeles Unified School District. In September, they set a 60-day deadline to develop a new curriculum. This was added to a resolution for affirmation of the district's anti-bullying measures to protect lesbian, gay, bisexual and transgender people.

The change isn’t much different than in 2004, when the districts had to update health materials to address gender and sexuality, said Judy Chiasson, program coordinator for Los Angeles Unified School District’s Office of Human Relations, Diversity and Equity. At the time, the district had to create its own material, she said, because there wasn't anything similar out there.

The district has reviewed what is already working in some of its classrooms.  Educators have also looked at materials by groups including the Anti-Defamation League, the Southern Poverty Law Center, University of California Los Angeles and University of Southern California. Those materials are the basis of a draft implementation plan for Los Angeles schools that is currently under review by the district Superintendent, a spokeswoman said.

In the meantime, at Downtown Magnets High School in Los Angeles, Daniel Jocz's eleventh grade history students continue to discuss lesbian, gay, bisexual and transgender issues. The subject has been part of Jocz's lesson plans since he started teaching seven years ago. Some days, that means a discussion about language: the negative use of the word 'gay' or using 'guys' to describe women.  His students will often compare and contrast the use of  these words with racial slurs.

The students have also looked at case studies that compare the 1955 murder of 14-year-old African-American Emmett Till in Mississippi with the 1998 murder of gay Wyoming college student, Matthew Shepard.

"There are parallels between the gay situation and the civil rights movement,” Jocz said. "If you don't include it as part of the narrative, you are ignoring it. You have to acknowledge it.”

Every generation has altered the way history is taught in schools, New York University history and education Professor Jonathan Zimmerman said. In the 1920s, it was the Irish, in the 1950s and 1960s, it was African-Americans and in the 1970s, it was Latinos.

“There was a time when history books only had white guys,” Zimmerman said. “Over time, successive groups fought to have their story become part of the main story.”

Adding lesbian, gay, bisexual and transgender studies is no different, he said. But schools must be careful not to just celebrate the group - they need to address tough questions and do some hard thinking. For example, he said, sending soldiers to fight for freedom for others while denying gay freedom in the military.

“We need to think about why we’re including them and what the purpose of these stories is in the first place,” Zimmerman said.

Which is why schools are looking at Taklender’s English class and Jocz’s history class.  They are still trying to learn how this generation’s history will be taught.

Taklender and Jocz say they are just doing their jobs.

"Even though I knew it was revolutionary,” Taklender said, “I didn't think it was a big deal."