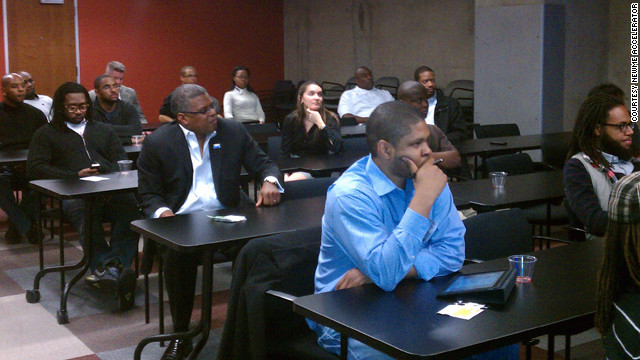 (CNN) - The NewMe Accelerator first took eight African-American entrepreneurs to Silicon Valley to immerse them in the world of technology startups. But since CNN followed the tech incubator for “Black in America: The New Promised Land – Silicon Valley”, its founders have gone bigger, creating a NewMe Community online. It now has about 465 members in 65 cities.

On Thursday night, nearly 300 minority entrepreneurs met in 10 cities around the country, coming together for the first time and keeping NewMe's momentum going.

"@newmecommunity put together a great event last night. #newmecommunity is going to be HUGE!!!” Joshua Samuel posted on Twitter after the event.

NewMe was the first technology startup accelerator for minority-owned businesses. Founders Angela Benton and Wayne Sutton said they felt compelled to expand the NewMe brand to other cities because of the large response from people who watched CNN's documentary.

END_OF_DOCUMENT_TOKEN_TO_BE_REPLACED

When CNN met Frances Herbert and Takako Ueda this summer, they were newlyweds - legally married in Vermont - but worried that Ueda would be required to return to her native Japan.

The Defense of Marriage Act prevents the federal government from giving them any benefits, so Herbert can't sponsor Ueda for a green card.

Just this month, the government denied Ueda's application to remain in the United States.

The government sent a letter denying their application and stating that Ueda is "required to depart the United States within 30 days from the date of this decision."