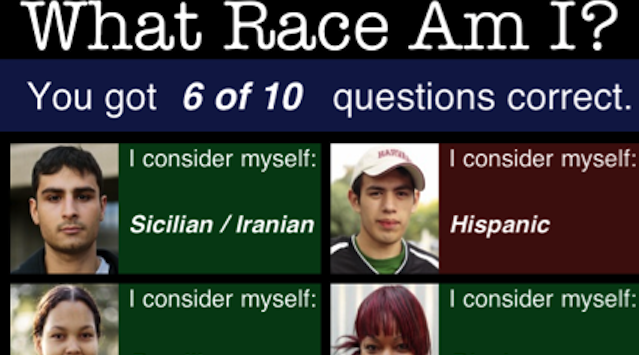 And for those that are fans of the app already, here's some good news: A second edition will be out early next year. It will include new photo examples and expanded educational information culled from the 2010 Census.

“I created this app to shake up people’s understandings of race in this country,” said creator Michael Baran, the director of Cambridge Diversity Consulting and a former Harvard anthropologist. “And we decided on making the game an app because we wanted it to always be there with you, so you could learn a little at a time and so that you could share the experience with friends and family.”

Before I shared, of course, I had to give the app a good test run myself.

The verdict? I have to admit, it's all types of fun. Not only because the curious and nosy have always wanted to play this game in real life, but because you have freedom to make a possibly impolite, ignorant guess with no one to there to disparage you. The game is enjoyable and can serve a higher purpose by drawing people into discussions about race. Now if that’s not fun, I don’t know what is.

But “Guess My Race” does have some problems. It occasionally gives you the choice of countries of origin for a possible answer, rather than race. This, according to its inventor, is by design.

“Those are the answers people often give when you ask them ‘What race are you?’ There is no clear consensus on what ‘race’ even means. That is one of the fascinating findings of this research.”

Still, it makes the game a little frustrating. I’m sorry, but if the photo of a white person comes up, and I choose white, I’m gonna get a little miffed when the answer is "Polish."

But I think some of the choices are also designed to clue you into some of the ways people classify race: Muslim, middle class, even East Coast. (East Coast? At least Biggie would be proud.)

So how did I do when I played the game myself? I was proud of my six correct out of 10, which, according to Baran, is “really good.”

But as much fun as this game may be for yourself and sharing with your friends - Yesss! I beat my coworkers! – a little warning: This is still not a game to be tried in real life. To all my curious white people out there who might want to walk up to one of their racially ambiguous coworkers or neighbors and ask, “What are you?” please, save yourself the faux pas - just try the app instead. The people of post-racial America will thank you.