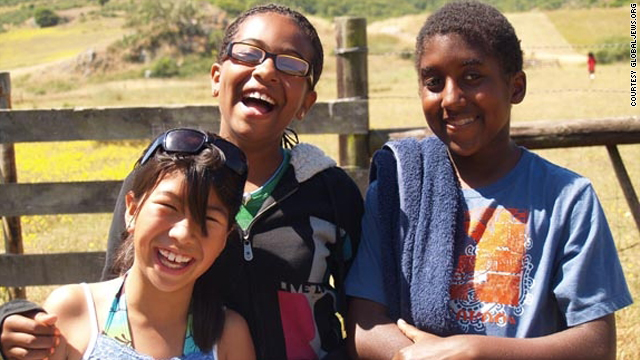 American Jews as a group are becoming more ethnically diverse due to intermarriage, immigration, adoption and conversion.
December 28th, 2011
07:00 AM ET

(CNN) - "But you don’t look Jewish," Jen Chau remembers being told often as a child.

"I still think society's idea of a Jew is someone who looks like Jerry Seinfeld or Woody Allen," said Chau, 34. "They don’t look at someone like me and think, 'Oh, she could be Jewish.'"

But the face of Judaism in America is changing, as the community becomes more diverse through intermarriage, adoption, immigration and conversion.

The nonprofit group Be'chol Lashon – the name means "in every tongue" in Hebrew – is trying to foster an expanded definition of Jewishness, one that includes the diverse backgrounds of Jews around the globe.

Founder Diane Tobin and her late husband, Gary Tobin, started the organization in 2000 after adopting their son, Jonah, who is African American. Committed to raising their son Jewish, they realized that they didn’t know any African-American Jews. Thus began a quest to create connections among Jews of different races, nationalities and ethnicities. The group runs a summer camp, educates people about Jewish diversity, and connects Jewish communities around the world.

Gary Tobin, who headed the Institute for Jewish and Community Research, carried out a 1999 survey about the ethnic background of America’s 6 million Jews. It found that about 20%, or 1.2 million, were non-Ashkenazi Jews (that is, Jews not descended from Central and Eastern Europe), and about half of that number were Sephardi or Mizrahi Jews (whose roots are in the Iberian Peninsula, North Africa and the Middle East). The remainder were what the institute and Be’chol Lashon calls "ethnically and racially diverse Jews" – which includes people of African, Asian and Latin American descent.

But the survey’s most important finding, says Diane Tobin, was that many of the Jews fitting into the latter category felt isolated, and sometimes unwelcome in their houses of worship.

It's a feeling Chau has herself experienced. As she prepared for her bat mitzvah – a coming-of-age ceremony for Jewish girls that welcomes them into the faith as an adult – her teachers at the Hebrew school she attended encouraged her father to be present at the ceremony, even though he was not Jewish. But shortly beforehand, her rabbi called a special meeting of the synagogue's ritual council, and announced that her father would not be allowed to participate. The reason?

That experience was part of what motivated her to form Swirl, Inc., an anti-racist group that fosters dialogue among people of diverse backgrounds, in 2000.

Although the majority of Jews in the United States are descended from immigrants from Central and Eastern Europe, the global Jewish diaspora includes people from a much wider array of places. Historically Jewish communities exist in places as far apart as Portugal, Uganda, India, the West Indies, Argentina, Yemen and China.

Marc Dollinger, who holds the Richard and Rhoda Goldman Chair in Jewish Studies and Social Responsibility at San Francisco State University, said that despite these diverse roots, many American Jews still have a hard time seeing and accepting Jews from nonwhite backgrounds.

"I don’t think most people are ready for these changes, nationally," Dollinger said. "Tradition is very powerful, change is very scary, and nonwhite Jews are still different enough and enough of an anomaly that (in some places) they would be seen as at best a curiosity, and at worst, a threat to tradition."

Lacey Schwartz was raised in a secular white Jewish family, but learned at 18 that her father was black. She felt that her Jewish peers questioned whether she was really born a Jew. Schwartz, who is working on a documentary about her experiences, said her adult life has been marked by an effort to find a place in which she could be accepted as both Jewish and of African descent.

"I think it’s more about feeling like I could walk into a room and feel like I would not be questioned… how to be one person, be yourself and walk into any door and not leave any piece of yourself behind," said Schwartz, who also works as an outreach coordinator for Be'chol Lashon.

Be’chol Lashon’s summer camp activities, like this play about the book of Genesis, are designed to help Jewish kids of all backgrounds strengthen their connections with the faith.

Orthodox Rabbi Benjamin Blech said that mistreatment of converts and the Jewish children of intermarriages is forbidden by Jewish law.

"They are not representative of the mainstream of orthodox Judaism or anyone familiar with Jewish law," said Blech, who is an assistant professor of the Talmud at Yeshiva University.  "In Jewish law we are supposed to be more warm and more receptive to these people and to converts, knowing that they have a more difficult row to hoe."

But Blech also said that marriages to non-Jews are prohibited under Jewish law, and that marriage outside the faith is a threat to the continued viability of the Jewish people.

"We Jews have survived, and the reason we have survived is because of this law. The minute it's bridged it takes a generation or two and there are no more Jews. If (the couple) promises to raise their child as a Jew,and if they will, they might be an exception to that rule, but the rule is not to go down that road, because it's too dangerous."

Diane Tobin said that the history of persecution against Jews has made the community as a whole more wary of those perceived as outsiders – even if those persons meet most rabbinical definitions of Jewishness by having a Jewish parent and following Jewish traditions. But she notes that it doesn't have to stay that way.

"We should be more welcoming, and it's not helpful for us not to be part of the marketplace of religions,"said Tobin.

Erik Ludwig, Be'chol Lashon’s chief operating officer, said it's important for the community as a whole to recognize that there is no one way to be Jewish.

"Judaism is not monolithic," Ludwig said. "Different cultures bring different practices, which should be celebrated, to the experience."