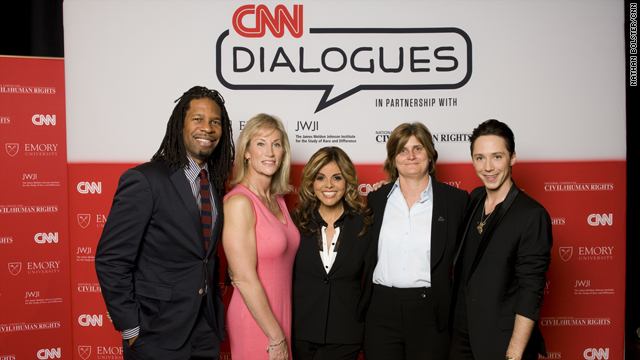 I met a fascinating guy at a recent gathering here in Atlanta. He was telling someone how well his son was doing in college.

What made his story interesting was this: His son used to be his daughter.

His daughter shared the fact that she felt attracted to other girls at the very young age of 8, he said. Over time, it became clear she was a lesbian. Her father accepted her sexuality.

Then came his second challenge. His daughter wasn't a lesbian after all. His daughter was his son. She was convinced of it - convinced she was different in a way that no vocabulary quite exists to describe.  Her father accepted that, after a long process of counseling.

Now the girl he raised, his transgender son, is at college, studying psychology.

And he is a proud father.

That was my introduction to the CNN Dialogue Series on the LGBT community, co-hosted with Emory University's James Weldon Johnson Institute, and it came before the panelists even took the stage.

The evening would get even more interesting. END_OF_DOCUMENT_TOKEN_TO_BE_REPLACED