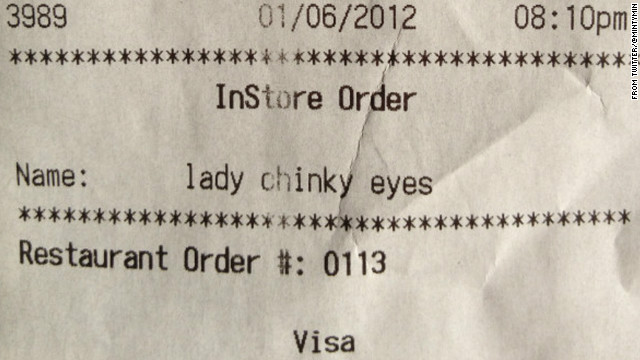 (CNN) - Papa John's Pizza fired a cashier at one of its New York restaurants and apologized to an Asian-American customer for a receipt that identified her as "lady chinky eyes."

"We were extremely concerned to learn of the receipt issued in New York," the company said in a statement posted on its Facebook page Saturday.

Minhee Cho, a communications manager at nonprofit investigative journalism group ProPublica, posted a photo of the receipt on her Twitter account Saturday morning and by the afternoon it was picked up by a local newspaper.

The receipt had been viewed online almost 200,000 times by Sunday afternoon, according to the counter on the Twitpic page.