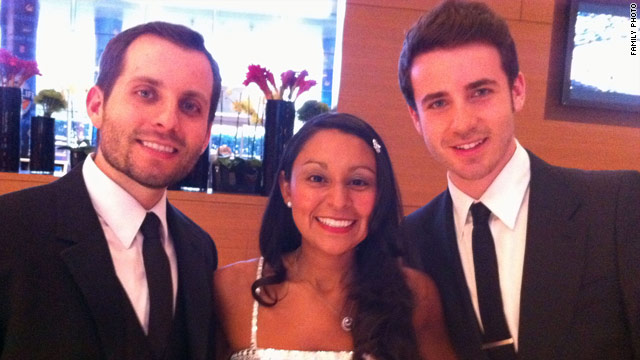 (CNN) - Craig Stowell fought with the U.S. Marines in Iraq in 2004 and now is fighting for the right of gays, like his brother, to marry in New Hampshire.

"My brother and best friend, Calvin, was tormented all the way through high school because people knew he was gay," Craig Stowell, 30, said in an online petition seeking to pressure New Hampshire legislators not to repeal the state's 2009 law that legalized gay marriage.

In a video posted on YouTube, Calvin Stowell described being bullied as a schoolboy because he was gay. "I was constantly asked by my peers: Are you gay? You sound so gay. You walk so gay," said the 23-year-old New Yorker, who works for a non-profit.

Craig Stowell, who is an information technology director for a cabinet maker in Claremont, New Hampshire, empathized.

"There were nights that I worried I may wake up and he wouldn't be there any longer; crushed by the misery he was forced to endure. When New Hampshire extended marriage to gay and lesbian couples, two years ago, he finally felt accepted. He finally felt like he belonged. Since that day 1,800 loving and committed gay and lesbian couples have married."

As the New Hampshire Legislature prepares to vote on whether to repeal the law, HB 437, Craig Stowell - who serves as the Republican co-chairman of Standing Up For New Hampshire Families - has launched an online campaign to keep the law as it is.

"If HB 437 passes, same-sex couples will no longer be allowed to marry," he says in an online petition he has posted at http://www.change.org. "This mean-spirited attack is nothing more than state-sponsored bullying."

So far, more than 75,000 people have signed it, according to Change.org.

"This campaign is resonating with people not only throughout New Hampshire, but across the country," said Benjamin Joffe-Walt, a spokesman for Change.org, which hosts online campaigns. "Craig won't stop defending his brother, and his campaign is inspiring thousands of others to stand up for the people they love, too."

Craig Stowell said Calvin was his best man at his wedding, and Craig wants to be able to reciprocate. "I want the opportunity to be his best man when he finds the person he wants to marry," he says in the petition.

But the proposed legislation says marriage between a man and a woman "predates organized government" and is in the best interest of society.

"The vast majority of children are conceived by acts of passion between men and women - sometimes unintentionally," it says. "Because of this biological reality, New Hampshire has a unique, distinct, and compelling interest in promoting stable and committed marital unions between opposite-sex couples so as to increase the likelihood that children will be born to and raised by both of their natural parents. No other domestic relationship presents the same level of state interest," the bill states.

The bill was sponsored by about a dozen lawmakers. Calls and e-mails to the sponsors were not immediately returned.

"We're encouraged that so many have stood up to say that they support this bill," said Brian Brown, the president of the National Organization for Marriage. "This is the right thing for the legislature to do, to fix what the Democrats forced down the throats of New Hampshire."