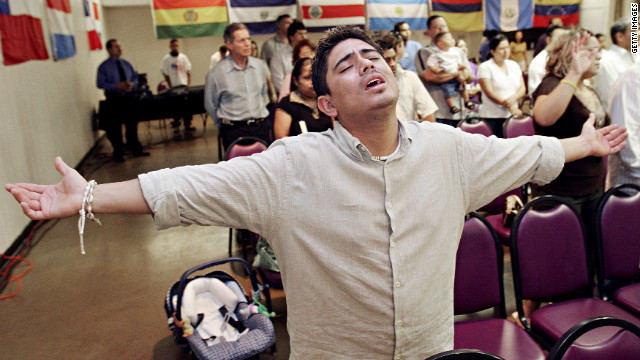 As number of Latino evangelicals grows, it's not politics as usual

Jobe is the senior pastor of New Life Community Church, which has 14 campuses across Chicago and its suburbs. He said he hears those words at least once a month, usually from newcomers - Hispanics raised in the Catholic faith who’ve started attending his non-denominational Christian church.

When Jobe launched New Life Community Church 25 years ago, the Midway neighborhood where his main campus is located was primarily populated by descendants of Polish, Lithuanian and Italian immigrants. Now, the neighborhood is primarily Hispanic.

“They don’t typically undermine [the church] where they came from,” Jobe said.
“They value the tradition, but what they often tell me is that they were not learning as much about the Bible and how it relates to their life today.”

The shift at New Life Community Church in Chicago is a reflection of a national trend, according to Luis Lugo, director of the Pew Forum on Religion and Public Life.

“While three-quarters of first-generation Hispanics [in the United States] are Catholic, the percentage for second- and third-generation Latinos goes down to less than 60%,” Lugo said. “Generation makes a huge difference. Later generations are much more likely to be converts.”

Why does it matter? According to the Pew Forum, there are key political differences among Latinos based on their religious preference.

Hispanic Catholics tend to vote Democrat by a two-to-one margin while Evangelicals and Pentecostals are evenly split between the two parties. In 2004, then President George W. Bush won 60% of the Latino evangelicals, a percentage that political parties are likely to pay attention to as they develop their strategy for the 2012 presidential election.

Hispanic evangelicals and Pentecostals tend to be more politically active than Catholics, have higher rates of citizenship and exercise their right to vote.

As more than 150 conservative Christian leaders will take part in a two-day meeting this weekend to consider unifying their support behind one Republican candidate. The leaders include well-known evangelicals such as Focus on the Family founder James Dobson and Family Research Council President Tony Perkins, but also the Rev. Samuel Rodriguez, president of the National Hispanic Christian Leadership Conference.

Politically speaking, Pew’s Lugo describes Latino evangelicals as “big government, social conservatives.” They tend to favor strong education, jobs and health programs, even above immigration. Still, they are staunchly conservative when it comes to issues like abortion and same-sex marriage.

The Catholic church is taking note that attracting Latino churchgoers isn’t just a matter of hosting Spanish-language services. Alejandro Aguilera-Titus, director of Hispanic ministry for the U.S. Conference of Catholic Bishops says “there’s no doubt” that second- and third-generation Latinos are not flocking to the Catholic church the way their parents did. But he says in recent years the conference has launched a number of initiatives to attract them.

In Miami, a program called Jóvenes Para Cristo, or Youth for Christ, is part of the outreach effort, along with Pascua Juvenil, or Easter Youth, in southern California. Both initiatives focus on personalizing religious experiences and emphasizing the Holy Spirit and “a joyful expression of faith” through music - much like evangelical churches.

“For many years, it was assumed that [Hispanic] kids would just assimilate into the existing programs for children and youth and that was the wrong assumption to make,” Aguilera-Titus said.

Jobe, the Chicago pastor, was born in Indiana, but grew up in Costa Rica and Spain with missionary parents. Fluent Spanish makes it easier for him to relate to Hispanic newcomers, he said, but most of the Latinos attending his church are second- or third-generation Hispanics who preserve their ancestors’ culture, but no longer speak their language.

“A lot of them are like my wife, Dee,” Jobe said. “Her grandparents came from Michoacán, Mexico. Her parents spoke Spanish as a second language and the kids know a few words in Spanish, but none of them really speaks the language.”

Nicole Sandoval Williams, 29, is a Latina Los Angeles native who was raised Catholic, but became a born-again Christian in college. She felt the religion of her parents and grandparents was no longer relevant, which led her to consider some different ideas.

“As a third-generation Mexican-American, I was not as connected to my roots as my parents and grandparents,” Sandoval Williams said. “You’re trying to find out for yourself what you believe in.”