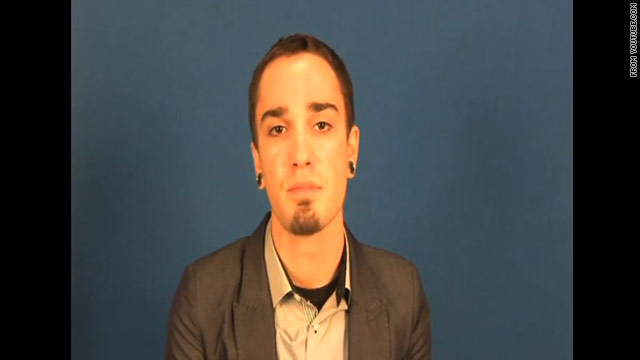 EricJames Borges, a gay teen from California who made an "It Gets Better" video last month, killed himself last week.
January 16th, 2012
02:39 PM ET

Opinion: How bystanders can protect kids from bullying

Editors Note: David M. Hall, Ph.D., is the author of “BullyShield,” an iPhone and Droid app. He is he author of the book “Allies at Work: Creating a Lesbian, Gay, Bisexual, and Transgender Inclusive Work Environment.”  Hall teaches high school students as well as graduate courses on LGBT issues and bullying prevention. His website is www.davidmhall.com and he is on twitter @drdavidmhall.

(CNN) - When EricJames Borges was in college, he said, his mother performed an exorcism over him to “cure” him of being gay. He recalled reaching a breaking point in high school when he was assaulted in class while a teacher was present. He said that verbal and physical assaults, which included being spit on, occurred on a daily basis.

Borges' personal pain was evident in the "It Gets Better" video he published in December, when his disposition and mood seem to provide a window into the ways he was tormented. In an effort to help vulnerable LGBT teens, he volunteered for The Trevor Project, an LGBT suicide-prevention organization.

In coverage of this tragic story, much attention has been paid to the fact that through his work with The Trevor Project, he knew what counseling resources were at his disposal, though he didn't manage to access them. However, little attention has been paid to what bystanders could have done at a more formative time in his life. Allies and bystanders could have protected Borges from years of isolation and the devastating feelings that accompany it.

Joey Kemmerling was routinely bullied in high school. He came out during middle school in an affluent, Philadelphia suburb. During gym class, Kemmerling said students told him, “’faggots can’t watch us get changed,’” and threw him out of the locker room. He says 30 students watched in silence.

Kemmerling explained that the multiple, silent bystanders make, “one comment feel like it’s being said by 18 people.... It wasn’t more than three to four kids [who bullied me], but it would feel like so much more. The isolation was so much greater, the sense of feeling as if you don’t belong just intensifies immensely.”

By high school, Kemmerling said he had a classmate pull a knife on him and say, “Your life is literally in my hands.”  Kemmerling told security, but he said they did nothing.

Kemmerling  said his pain and isolation resulted in formulating a plan to commit suicide, to hang himself from a school staircase. As he reached the staircase, he made a last-minute decision to live.

Dan Olweus has pioneered a program to reduce bullying in schools, focusing on what he calls the bullying circle.  The circle is made up of not just the bully and his target but also bystanders:

Follower or Henchmen: student takes an active role but does not start the bullying.

Passive Bully: student supports the bullying but does not take an active part.

Passive Supporter: student likes the bullying but does not display open support.

Disengaged Onlooker:  student watches but feels that it is "none of my business.’"

Defender: student dislikes the bullying and helps the target.

The bully often likes negative attention from teachers, and therefore punishment has a limited impact. Indeed, being a bully often makes a kid popular.

In short, adults can help to dissemble the bullying circle. If bullying doesn’t give the bully more positive attention from his peers, we tend to see a lot less of it.

After long term commitment to Olweus methods (studies looked at eight and 20 month interventions), his research claims bullying in schools drops by more than 50%.  I have worked with hundreds of teachers in my graduate course on bullying prevention, and this program works when implemented correctly.

Little or haphazard training and commitment to bullying prevention in high schools is too often the norm. Why don't more schools adopt such programs? Professional development – which takes time– is necessary to reduce bullying.  A lot of teacher time is spent on preparing students for high stakes standardized tests required by federal law. Bullying prevention will be widely implemented when reducing such destructive behavior is as important as increasing standardized test scores.

Kemmerling, now a high school senior, switched to a neighboring school and finally feels safe and welcome. Today he is working on his college essay and has larger plans to change the world.

Kemmerling once had someone who was tormenting him then stop the bullying. “There were four or five kids calling me a faggot ... One of them said, ‘We’ve said enough. Come on, let’s go.’ Just the way that he was able to stop the comments with something so simple was so beneficial to my life.”

What is your school district’s policy on bullying? Does it include sexual orientation and gender identity or expression? How many in-service hours are dedicated to bullying? Do children learn how to be defenders?

If the answers you receive from your district are not satisfactory, if bullying prevention is not as important as standardized test scores, then become an advocate for change.

We will never know what was truly in EricJames Borges' head and heart. Yet we know he said that, for years, bystanders looked on while he was verbally and physically attacked. We know that his experience built walls of isolation around him that proved suffocating.

Your efforts for bystander empowerment in your community may save lives not just of lesbian, gay, bi-sexual and transgender adolescents like Borges, but of all kids.