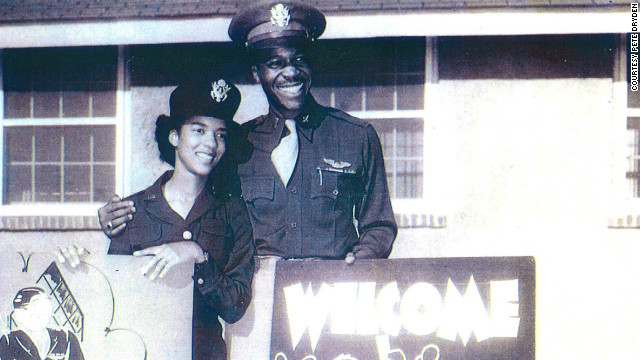 Irma "Pete" Dryden served as a nurse for the Tuskegee Airmen, and later married one: Charles "A-Train" Dryden.
February 2nd, 2012
06:00 AM ET

(CNN) - As the Tuskegee Airmen fought for their place in the skies during World War II, they were supported by a dedicated and often forgotten cadre of women.

They were nurses, mechanics, supply pilots and secretaries. They nursed injured bodies and souls, packaged and repackaged parachutes, cleared land for runways and base buildings, delivered supplies and did the other work that helped keep the base running.

The Tuskegee Airmen, whose combat service is depicted in the recently released film "Red Tails," earned their place in history by being the first African-American pursuit squadron. They were charged with protecting bombers from enemy fire while flying missions over parts of Europe and North Africa. Their training program, first based at the historically black Tuskegee Institute in 1941, eventually grew to include nearly 1,000 pilots and several air bases.

It isn’t clear exactly how many women were included among the estimated 15,000 people that worked as part of the program. But Ruth Jackson, a research librarian at the Universityof California–Riverside, said her research confirms at least 41 women were nurses. The university houses a large archive of material related to the Tuskegee Airmen, and Jackson has been collecting oral histories from many of the female personnel.

"They believed very strongly, just the way the men did, that it was ridiculous for the barriers to exist, and for the military to have believed that African-Americans were not intelligent enough or brave enough to fly," Jackson said. "They were very much devoted to the cause and the success of the experience. They felt very special to be a part of it, as a matter of fact."

Some of the women working with the program married the airmen, and continued their supportive role as wives. Irma "Pete" Dryden served in such a dual role – first working as a nurse at the Tuskegee air base’s hospital.  Dryden, whose nickname is derived from her childhood habit of wiggling her nose like Peter Rabbit, eventually married an airman she met her first day on base. Charles "A-Train" Dryden was an instructor and pilot, commissioned as a second lieutenant in 1942. At the time, he was part of the second-ever class of black pilots to complete the U.S. Army Air Corps training program. They were married 32 years, then divorced. Charles Dryden remarried and passed away in 2008.

"Pete" considers her service as a Documented Original Tuskegee Airman among her proudest accomplishments. She’s remained an active member of Tuskegee Airmen Inc., the nonprofit organization that preserves and teaches about the group’s legacy.

She volunteered to serve as a nurse on base just after finishing her training at Harlem Hospital. She was 23 when she boarded a train in April 1943 to travel to the air base being built outside Tuskegee, Alabama.  A New York City native, she had never experienced the Jim Crow racism of the south, but she and two fellow black nurses got their introduction after having to change to a segregated train in Washington, D.C.

The train didn't have a separate dining car for African-Americans, so Dryden and two fellow nurses were given strict rules about when and where they could eat their meals. They were to be only at certain times, and as they ate, a curtain was pulled around them so that the white passengers wouldn't have to acknowledge the "coloreds" in their midst.

"I had never been exposed to anything so humiliating," Dryden said.  "But something came out of this humiliation – I knew I can overcome anything and I can help whoever I'm with. Like these young men, I knew I could give them strength, and I did."

To Dryden, that meant lending a sympathetic ear as well as bandaging a wound.

"We were to run the hospital and be there for these young men," said Dryden, now 92. "They were all young and they needed some counseling – somebody to talk to – to help them get over the bad times when they had not done well in an examination or something, someone who was there for moral support. And it was the women who they returned to the most."

The airmen being trained as part of what was then called "the Tuskegee experiment" were under tremendous pressure. In addition to the stresses of military service during wartime, they worked knowing that their success or failure would be used as justification for or against African-Americans’ participation in the armed forces. Their training was grueling on base, and at least as trying was the racism and discrimination they faced in the communities surrounding some of the bases.

"We knew we had a purpose," Dryden said. "We had to make this thing work, with a passion that other units didn’t have to exhibit."