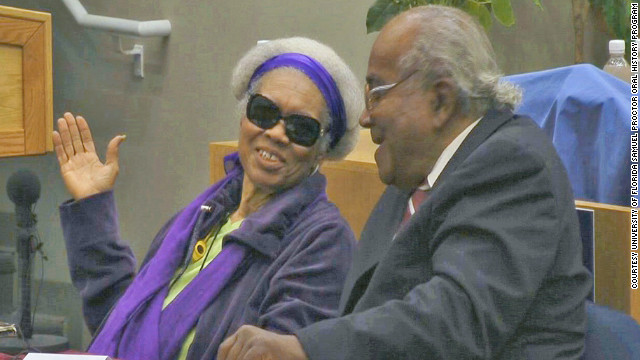 She showed early signs of being a fighter.

At age 15, she was  stunned after a white postman made a lewd comment toward her, and she filed a formal report with the help of her mother.

A year later, prompted by other white women who had complained of the worker, an investigator came and asked questions, seeking to intimidate the young woman, she wrote in “Freedom in the Family: A Mother-Daughter Memoir of the Fight for Civil Rights." Later, Due learned the worker had been fired.

“I didn’t know it then,” she wrote. “But refusing to back down would be a trademark in my life.” 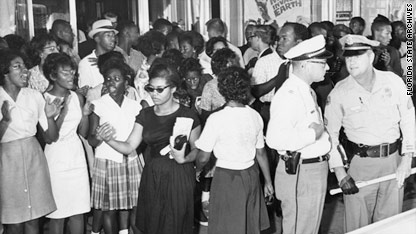 Patricia S. Due, in a black dress, at a demonstration in Florida, in 1963.

By the age of 19, she helped found a local chapter of the Congress of Racial Equality with her sister, Priscilla. Years later, Due was a field secretary for the organization, supervising voter drives and registration in northern Florida.

And the jail-in that brought her national attention? It prompted a speaking tour that took her around the country, drawing support from the likes of Eleanor Roosevelt, James Baldwin and Harry Belafonte.

The dark shades she wore, even indoors, provided a window to her past: she wore them to protect sensitive eyes, a result of being tear gassed in a 1960 march, her family said.

Due was small in stature, but stood tall in courage, her daughter, Tananarive, remembers in “Freedom in the Family” a book she and Due co-authored. “She might be short physically, but she seemed like a giant.”

Last year, Tallahassee’s mayor recognized her lifetime of achievement, and proclaimed May 11, 2011 Patricia Stephens Due Day.

Due spoke publicly for the last time at the University of Florida on February 16, 2011.

“I know we’ve been through a lot, but we can’t let up, because the struggle continues,” she said to a crowd of more than 200.

She is survived by her husband, civil rights attorney John D. Due; three children, Tananarive Due, a professor and writer, Johnita Patricia Due, CNN’s chief diversity chair and assistant general counsel, and Lydia Due Greisz, a Dallas attorney; her sister, Priscilla Stephens Kruize, a brother Walter Stephens, and five grandchildren.

“My parents were more than parents to me, they were living monuments,” Tananarive Due wrote in "Freedom in the Family". “As far as we were concerned, they had helped change the world.”