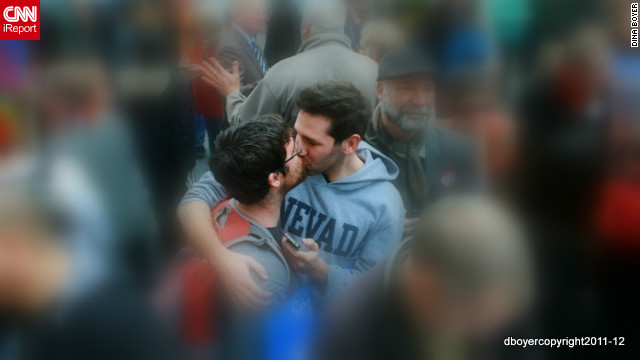 Opinion: Why I support gay marriage in Washington

Editor’s Note: Rev. Mike Denton is a conference minister of the United Church of Christ working with congregations in Washington, Northern Idaho and Alaska. He supports gay marriage.

(CNN) - It was a little more than 15 years ago when two friends of mine - I’ll call them Amy and Christine - asked me to officiate at their wedding. Actually, at the time, I’m not sure we called it a “wedding.” Fifteen years ago, gay and lesbian folks were still stepping gingerly around the words “wedding” or “marriage.” It didn’t feel safe and just didn’t seem to be worth the fight so words like “union service” or “commitment service” were used instead.

Amy and Christine knew this would be a service that wouldn’t be recognized by the state and, although that was a bit of concern, it wasn’t why they wanted to marry, anyway. They loved each other. They wanted to tell the world. They wanted to ask for the support of those who loved them and they wanted to do it in a public way.

The service was held on a beautiful October Saturday. In a church filled with flowers, music, family and friends prayers were said, vows were shared, tears were shed and, of course, the couple was lovely. The only big difference was at the end of service when I said the words, “You may both kiss the bride.”

I know that not everyone who reads these words will read them with the same sense of joy that others will. In particular, some of my Christian sisters and brothers will read this while shaking their heads or with a tight, growing knot in their stomach. I understand that. There would have been a time I might have been there, too.

I grew up in church but I don’t remember homosexuality being talked about all that much. I thought it was wrong because that’s just what I heard the most from those Christian voices that were best able to garner media attention. The same six biblical verses referred to seemed, at the time, pretty clear. The Sodom and Gomorrah story was one that came up a lot. Quotes from chapters 18 and 20 of Leviticus, as well as the first chapter of Romans, too.

A couple similar to Amy and Christine

I was never anyone who would have protested against gay rights or actively worked to limit the rights of gay and lesbian folks. Suggesting someone might be gay was more in the realm of rumor than identity. As a teen, I did sometimes tell anti-gay jokes and AIDS jokes, like most of my peers. I was sometimes part of teasing people who some suggested were gay and I would call something “gay” as an insult. Still, I never really thought about it all that much. Being anti-gay was just what you did and what you thought and I don’t remember ever being told it was inappropriate or wrong to think this way. In my mind, I had included homosexuality in that set of sins that were in the realm of drinking too much or gambling. It was wrong, but there were worse things and it just didn’t have all that much to do with me.

It was sometime in my first year of college when someone I knew told me he was gay. When he started to tell me his story, I think I thought I was hearing a confession. As he continued to talk, I began to hear more and more clearly that this wasn’t a confession about what he’d done, but a story about who he was. Up until that moment, I’d never really understood that difference.

In the days that followed, I did a lot of reflection. I looked at the bible, again, and really studied it this time. I prayed. I prayed a lot. What first began to become clear was that, regardless of what I thought about homosexuality, my treatment of and joking about gay and lesbian people had been wrong. I had treated other people in a way I am sure Jesus would not have.

What was reaffirmed was that I was not, nor ever had been, a biblical literalist. For example, I had long ago set aside some of the bible’s descriptions about the role of women as a cultural description of that time and not a prescription for this one. I started to look at some of those biblical texts about homosexuality in the same light.

In the years that followed, this clarity only increased. I met more and more and more gay individuals and couples. I heard their stories of self-realization; falling in love; and their struggle for self, family and societal acceptance and realized how far they were from the deviant parodies I’d been exposed to while growing up. The identity labels began to fall out of the way as friendships began.

I learned more about the bible and the multiple ways in which pieces of it could be, and had been, interpreted and misinterpreted. When you looked at some of the original Greek and Hebrew, it became clear that these verses really weren’t talking about a loving couple like Amy and Christine, they were talking about the religious practices of other religions of the day or sexual relationships that were about power, not love.

I also met folks within the church who were working for the inclusion and acceptance of gay and lesbian folks in the full life of the church; not as “sinners” but as people created by a loving God. In 1999, I was ordained into ministry by a denomination called the United Church of Christ that for many years had welcomed and included the LGBT community and those who loved them in to their wide continuum of belief and practice.

The Washington state legislature just gave gay and lesbian couples access to the same rights that straight couples have under state law. This law also gives the state the ability to provide the same supports, as well as require the same responsibilities, of gay and lesbian couples as any other couple. As someone who, in a pastoral role, sees the stress and strain this legal ambivalence puts on gay families and the communities they are part of, I know how important this law is.  Also, regardless of what some may suggest, this law will not force pastors who oppose gay rights to officiate at the marriages of same-sex couples or sign a wedding license for them. However, it will allow me to treat gay or straight couples equally by being able to sign a wedding license for both.

I wish I could have done that for Amy and Christine. They are still married, 15 years later. They are great parents, active church members and regular participants in their community. Their friends, family and church still support their relationship, too. It’s only the government that does not.  I thank God for the fact that, slowly but surely, this is starting to change.

The opinions expressed are solely those of  Rev. Mike Denton.