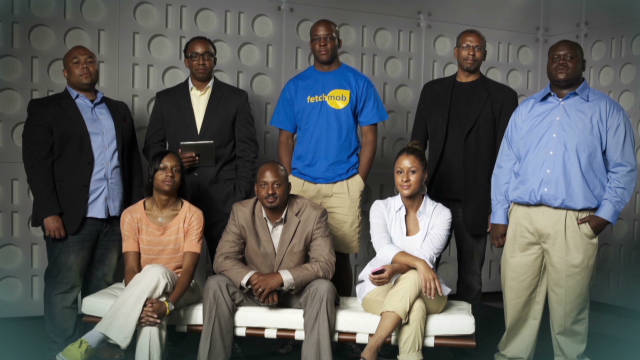 In their own words: BIA entrepreneur updates

Angela Benton
“To say that it’s been a whirlwind since Wayne and I decided to put together NewMe in 2011 would be an understatement. It continues to amaze me when I think about where my life has gone, both personally and professionally, in under a year.  Especially considering my life wasn’t too shabby to begin with!  Since the NewMe Accelerator wrapped up in August I decided to move my family to Silicon Valley so that working on NewMe would be more manageable.

The number of opportunities that have been brought to the table have been nothing short of God’s work and plan.  I would have never thought that I’d get the chance to experience such a wide spectrum of my work, from visiting people and communities in the Hunter’s View neighborhood in San Francisco (probably the most Black people I’ve seen in the whole city at one time) to having engaging meetings with multi-billionaires on the future of NewMe.  You can check out a full update on what we’ve been doing on that front here.

So far the transition has been fairly smooth. There have been bumps in the road but that’s to be expected when you relocate 3,000 miles.  My kids enjoy it here so I don’t think I could have asked for anything more than that.   Right now I’m excited and focused on the new NewMe program that will begin on February 20th, as well as scaling and developing what we’ve built.... exciting times right now! :)”

Hajj Flemmings
“My start-up Gokit has pivoted and we are excited about launching in March during SXSW Interactive in Austin, Texas.  Our product will allow users to create profiles and capture and share life experiences through personas. Gokit’s new direction will also feature mobile apps, for iPhone first, then Android, to enable users to curate their stories and experiences. I have also been speaking a lot in the Michigan market to audiences regarding startups and the startup economy.”

Anthony Frasier
“Since leaving the NewME house I have been on a constant grind. We released a mobile app for my start-up Playd on the iOS app store and on the Android Marketplace. I have been working on Playd day and night to deliver an experience gamers love. We are planning new iterations and I plan to reveal new partnerships soon. I also started BrickCityTech.org which is a tech meetup I co-founded based in Newark, NJ. The idea is to bring some of that same energy from Silicon Valley back to New Jersey, and we partnered with New Jersey Institute of Technology to help us make that a reality. People have been asking me if I will move to Silicon Valley since the airing of the show. My answer: eventually. When I came home I had to establish something here, and right now that is where my focus is. Of course I'll still be flying back and forth, and I hope to be fortunate enough someday to have a home in both locations. I told Soledad I wouldn't leave my city empty handed, and I meant it.”

Pius Uzamere
“In January, our start-up BeCouply launched a new subscription service called BeCouply Dates that sends couples on amazing dates every month. So far, the service has gotten rave reviews from our first San Francisco subscribers and we've got hundreds of couples on the waiting list across the country. In addition, several thousand couples are on the waiting list for the iPhone app that we'll be launching in the next few months. Finally, we closed additional venture capital funding in January.”

Hank Williams
“Since the documentary aired, my start-up Kloudco is still in private testing. We have been testing for both bugs and user satisfaction. In the process we have refined the Kloudco feature set and look and feel based on user feedback and are now pretty excited because we think we have nailed the product experience. The underlying technology is much more complex than a typical website because of the volume of data we are designed to manage, so our next steps involve simulations with more data, and testing with larger numbers of users before opening the doors to the public.”

Tiffani Bell
“My start-up Pencil You In is currently in the process of releasing its iPhone, iPad, and Android apps. With a new developer onboard, the company is now helping stylists and barbers in the U.S., Canada, the UK, and Australia to accept appointments online.”

Crisson Jno-Charles
“Our start-up Fetchmob is being re-designed to cater to less well-defined communities. The next major release will occur next month.”