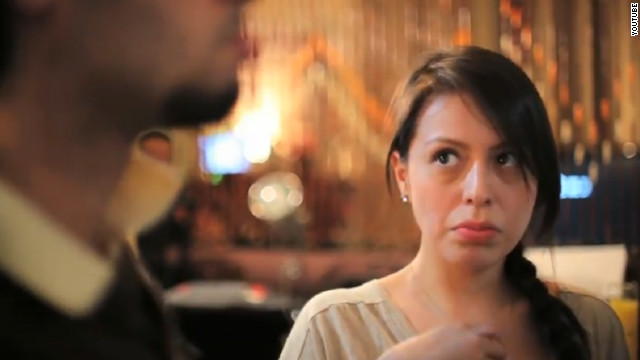 Except for riffs on Arizona (“if you could live anywhere in the world”) and Gov. Jan Brewer (“my idol”) the video's creators said they tried to keep it light and avoid serious topics.

"We wanted to do something that Latinos and non-Latinos would walk away from laughing," said Lance Rios, founder of Being Latino, an online portal for news and opinion aimed at second- or third-generation bilingual Latinos in the United States. "We didn't want to perpetuate negative stereotypes.”

So, while the video features several instances of a young woman leading men into her bedroom and assuring them that her father won’t mind, there is no mention of teen pregnancy or other themes commonly applied to Latinos in mainstream media, Rios said.

"It's meant to prove that yes, as a community, we have issues,” said Rios, a second-generation Puerto Rican who was born and raised in Cleveland, Ohio. “But we're Americans, too, and just because we're tied to other countries doesn't mean we can't make fun of ourselves just like everyone else in a way that's not offensive."

With more than 21,000 Youtube views since last Wednesday and numerous shout-outs on Latino blogs and mainstream media outlets, it's an approach that seems to be gaining traction. Rios hopes its popularity demonstrates the need for more popular culture content relevant to English-speaking Latinos who identify with American culture and the cultural heritage of their families.

"The main thing we wanted to do was create something that would go viral and track back to our site and our audience," he said. "Often, they're ignored by the mainstream media, but this video shows that our audience is alive and well in the social media space and they're looking for content."