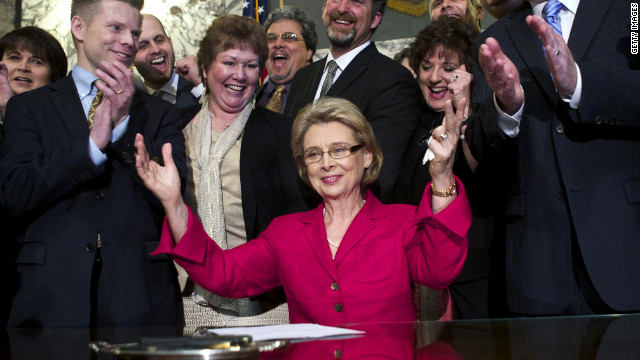 (CNN) - More than two decades ago, when the issue of same-sex marriage first broke into the national consciousness, a gay couple couldn't dream of getting married.

A decade ago, no state would allow it, and more than two-thirds of Americans opposed it, according to national polls.

Now, some 12% of Americans live in states that allow, or soon will allow, gay marriage. And polling, supporters say, suggest approval for same-sex marriage is on a quickening upward trend.

So is the debate over same-sex marriage finally nearing an end game?

With ballot fights in four or five states this year and court battles in a dozen states, supporters of gay marriage are hardly ready to declare victory.

But, they say, it's now it seems only a matter of time.

"We could see a nationwide victory as soon as one to two years. It could also take as much as 10 years," said Evan Wolfson, president of Freedom to Marry, which favors recognizing a right to marriage for gay couples.

Citing the 31 states in which voters have approved measures defining marriage as a union between a man and a woman, National Organization for Marriage President Brian Brown said he doesn't believe polls saying that a majority of Americans now support same-sex marriage.

"The reality is that in these 31 states, everywhere we've had a vote, is that voters have said they believe marriage is an institution between a man and a woman," Brown said.

They are Connecticut, Iowa, Massachusetts, New Hampshire, New York and Vermont. None of those same-sex laws were approved by the electorate.

Washington's law would go into effect in the summer unless challenged - which is likely, according to Jack Tweedie of the National Conference of State Legislatures.

Maryland could join the list soon, if the state Senate approves a bill legalizing same-sex marriage and Gov. Martin O'Malley signs it, as he has promised to do.

A state Senate committee voted Tuesday to refer the bill to the full Senate, according to CNN affiliate WBAL.

Legislation was introduced last week to allow same-sex marriages in Illinois, and holdover bills from 2011 remain technically active in Hawaii and Minnesota, Tweedie said. It's unclear whether any will see significant action, he said.

An effort is also under way to put a proposal to legalize same-sex marriage on the November ballot in Maine, where voters previously overturned a 2009 state law authorizing same-sex marriage.

Meanwhile, voters in Minnesota and North Carolina will consider proposals in November to ban gay marriage in those states. New Hampshire lawmakers may also consider a repeal of its same-sex marriage law, according to the National Organization for Marriage.

Voters will likely also get a chance to endorse or reject Washington's new law, as well as the legislation in Maryland, if it is passed.

Finally, lawsuits seeking to expand civil unions or turn back laws banning same-sex marriages are working through the courts in at least 12 states, according to the National Organization for Marriage, including Hawaii, Minnesota and California - a pivotal battleground.

In California, a federal appeals court recently ruled against a voter-passed referendum that outlawed same-sex marriage. It said such a ban was unconstitutional and singled out gays and lesbians for discrimination. The case appears to be eventually headed to the U.S. Supreme Court.

Brown said Democratic legislatures - not voters - have been behind most of the recent action on same-sex marriage. Upcoming ballot initiatives will give voters an opportunity to refute the polling, and Brown says they will.

"What you will see is that there will be a vote in states representing all the different regions of this country and people are going to have the chance to say, emphatically, 'No'," Brown said.

Same-sex marriage became a national issue in 1993, after the Hawaii Supreme Court ruled that a ban on same-sex marriages violated the state constitution.

In 1996, Congress passed the Defense of Marriage Act, which defined marriage solely as a union of a man and a woman and said states did not have to recognize same-sex marriages performed in other states.

In November, the Pew Research Center for the People & the Press reported a more divided public - 46% in favor of same-sex marriages and 44% opposed.

But Pew also said the uptick in support seems to be gaining steam, having jumped 9 percentage points in two years.

Despite Brown's belief that the polling is invalid, the dramatic change in attitude reported by the polls encourages Wolfson.

"There's no question that with so many Americans having changed their minds and opened their hearts as they've heard the stories of real couples and thought about why marriage matters, we now have tremendous momentum towards ending marriage discrimination," he said.

"That said, there will be ups and downs and there will be bumps as well as advances, and that's the story of any civil rights movement."