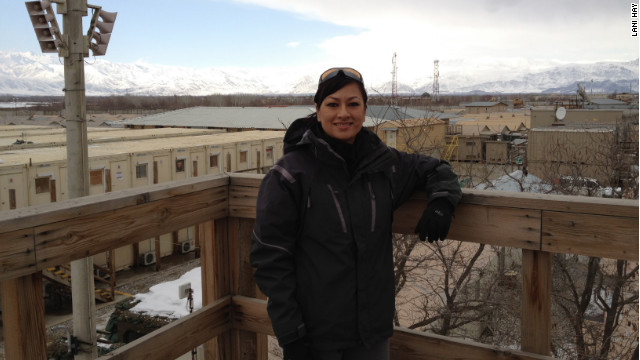 Step in the right direction, but not far enough, says female veteran

(CNN) – Lani Hay was just a kid when she decided on her career goal: to join the Navy, serve her country, and become a flying ace with the Navy's Blue Angels. The child of Vietnamese immigrants, Hay made it all the way to the U.S. Naval Academy before learning that a career as a Blue Angels pilot would be impossible: flying in the troupe was considered a combat role, and as a woman in the mid-1990s, she was barred from participating.

What kept her out was a policy called combat exclusion, which forbid women from being part of units that could be exposed to the dangers of the front line – direct combat, hostile fire, or capture. But the reality in conflicts such as Iraq and Afghanistan is that the front line is not a defined field, and women can be thrown into what is essentially a combat role at any time or place.

Hay, a veteran of intelligence and reconnaissance operations in the Persian Gulf and Kosovo, said it's time for women to get the credit they deserve for serving in what amount to combat conditions.

"To get around the Combat Exclusion Policy as written, women are being 'attached to' and not 'assigned to' battalions, as intelligence officers and communications officers for example, but they are not getting the credit for being in combat arms," said Hay. "Not allowing women the opportunity to 'get credit' for their combat experience and contributions to front-line battalions ultimately denies them choice assignments, which hinders career advancement."

The Department of Defense recognized that earlier this month when they announced that they would be changing those rules to open 14,000 new positions to servicewomen, allowing them to officially serve in positions such as tank mechanics and artillery radar operators. They are still barred from the infantry, special forces, and from performing certain jobs in communications, logistics and intelligence for units smaller than a brigade (which in the Army is composed of 3,000 to 5,000 troops).

Hay graduated from the Naval Academy in 1997 and went on to become an Air Intelligence Officer, serving in several overseas missions before being released from active duty in 2002.  Then she served three years in the Individual Ready reserves before being honorably discharged. Now she runs Lanmark Technology, Inc., a government contractor which provides administrative and technological services and asymmetric warfare consulting to federal and state agencies. Hay is also a passionate advocate for women’s right to be full members of the armed forces. She doesn't think the new policies go far enough.

"This is progress, but too little too late," said Hay. "The combat exclusion policy needs to be completely lifted to not only establish a level playing field for qualified women to enter all military positions and specialties, but to also reflect the realities and necessities of modern day warfare."

According to Pentagon statistics, 144 women have been killed and 865 have been wounded during combat and noncombat actions in Iraq and Afghanistan. About 12% of the 2.3 million military personnel serving in missions in the last decade have been women.

The biggest reason to give women full access to combat roles is not just a sense of fairness and equality, Hay said – it's because the success of the mission depends on it. For example, women are recruited especially because of their gender to serve on Cultural Support Teams in Afghanistan, which perform searches and intelligence collection that an all-male unit wouldn’t be able to do because of local restrictions on interaction between the sexes.

"The women on the Cultural Support Teams do what their male counterparts are unable to do, such as conducting female searches on burqa-clad women, or engaging the female population to conduct information gathering or build individual, group and community relationships," said Hay. "Although the women assigned to the Cultural Support Teams are training for and conducting the missions with their male counterparts, they are not getting the acknowledgement for being in the Special Forces."