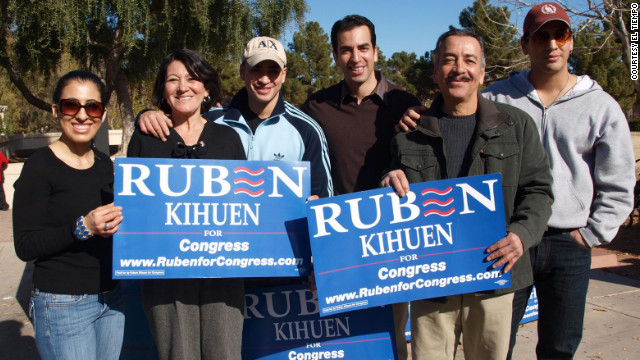 Ruben Kihuen (third from the right) surrounded by family during a campaign canvassing event in January.
February 24th, 2012
04:52 PM ET

Disappointment for Latinos in Nevada

(CNN) – It’s a Thursday in early February, and Fernando Romero, the Godfather of Latino politics in Nevada, is stressed out. Two days ago, Ruben Kihuen, the Democrat who was trying to become the state’s first ever Latino congressman announced he was dropping out of the race.

“It’s a big let down for the community,” Romero says of Kihuen’s decision. “The [Latino] voters were inspired to come out to vote, but right now we’re finding it difficult to burn a fire under their butts.”

Nevada’s Latino population grew 81 percent from 2000 to 2010, and many here thought this candidate and this race would be their chance to flex some new political muscle and be represented by one of their own. “We were hanging our coats on him,” Romero says of Kihuen.

Turns out a lot of people were “hanging their coats” on this little-known newcomer who went from 9-year old immigrant from Mexico to invited guest at the president’s most recent State of the Union address. Democratic strategists hoped the excitement surrounding his race would lead to big Latino voter turnout that would in turn help President Obama’s bid for a second term.

Latino voters across the country, not just in Nevada, are this presidential election’s “Florida Florida Florida.” Both parties—and the national media—are focusing on this group, waiting to see how or if they will vote in November. This week’s cover story in Time Magazine, “Why Latino Voters Will Swing the 2012 Election” says it’s a numbers game.

Andres Ramirez, an architect of the Kihuen campaign is also the National Vice Chair of the DNC’s Hispanic Caucus. He says there has been an increase of 2 million Latino voters nationally for every presidential cycle since 1996. In 2008, roughly 85% of Nevada Latinos turned out to vote for President Obama, according to the Pew Hispanic Center. That record number propelled the freshman senator to win a state that voted for George W. Bush four years earlier.

In 2012, 1 in 4 constituents in the state of Nevada are Latino, representing 15% of all registered voters. With a majority of those voters registered Democrat, Ramirez says the numbers are in place to help the party keep Nevada from going red in 2012. Other states with a large or growing Latino population paint a similar picture.

The numbers are there and Latino voters are ready to be persuaded, but it’s not clear whether it will be the Republican candidate or President Obama who will have the message and the platform that resonates strongest.

Much has changed in Nevada since 2008, and according to Romero, who is the president of the non-partisan group “Hispanics in Politics,” Latinos in Nevada are now “disillusioned” and “uninspired” with regard to President Obama. With Kihuen out of the race, Romero says that could spell trouble for Obama’s re-election bid in a key battleground state.

“The president just isn’t doing it,” Romero says of Obama.

Otto Merida, the CEO and founder of the Latin Chamber of Commerce, agrees that President Obama should not assume that Latinos will back him again this time. “It’s not that Latino voters will vote for a Republican for president in 2012…it’s that they won’t come out to vote at all.”

A registered Republican, Merida says even he feels the fallout of the end of the Kihuen campaign. “I’m very disappointed that Ruben dropped out. He produced a lot of excitement, even for Republican Latinos. He had the youth out on a Saturday, knocking on 3,000 [doors] or something. I’d never seen anything like it.”

Merida and Romero both collaborated on Kihuen’s campaign. The crossing of party lines among the Latino community leaders highlights the priority for both men: mobilizing the Latino vote in Nevada. No stranger to working with Democrats, Merida says he “got caught up in the hope” and voted for President Obama in 2008. He doesn’t plan to vote for him again this time around.

Brookings Institution fellow and political analyst David Damore agrees that Nevada will be competitive in 2012, attributing that largely to the power of the Latino vote.

“Nevada has the large concentration of Latinos; it’s a fast growing state for that demographic. But the state is a place very much so in flux,” Damore says. “It was a pretty Republican state, but it's swinging. You have a lot of grass roots groups mobilizing.”

Ramirez, Kihuen’s former campaign manager is still confident Latinos will show up. He points to “two natural things: growth within the Latino community [in Nevada] and increased efforts around new voter registration.” He told CNN by phone that “the fear that Latinos won’t come out to vote is being exaggerated. It’s been a concern for every election cycle, but nothing shows Latinos won’t turn out.”

Damore of the Brookings Institution adds, “[Latinos] are going to be disillusioned with Obama and Ruben was a fairly charismatic guy to help supplement the vote, but the Dems don't have to deliver much when the candidate running against them is fiercely anti-immigrant. My guess is [Latinos] may not love what Obama's done, but then they’ll look at the alternative and vote for Obama.”

Merida believes the uncertainty currently brewing in the battleground state is a case study of what the Obama re-election team will face across the country. “The problem is many people want the Hispanic community to have one issue, which is immigration. That’s very important, but at this time our economy and education is paramount to what's going on. Those are big issues that affect the whole country, including Hispanics. In southern Nevada, for instance, we have a 50% dropout rate in high school for Hispanic students. We need more state resources for our teachers, and so forth,” he adds.