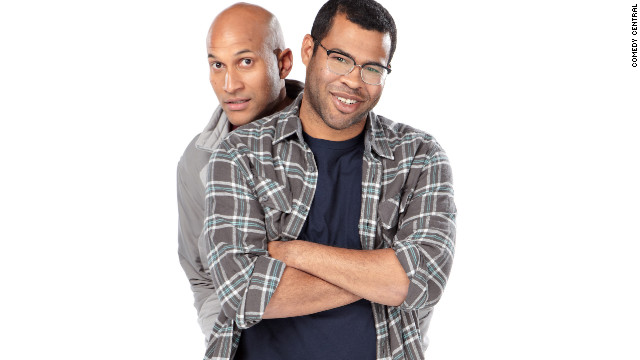 (CNN) – Keegan-Michael Key and Jordan Peele are self-deprecating and triumphantly nerdy, and in the first season of their Comedy Central show, they're proving there's not just one way to be black and funny.

"Key & Peele," which airs at 10:30 p.m. Tuesdays on Comedy Central, combines elements of stand-up, sketch comedy and improvisation. It was  just picked up for a second season on the cable channel.

Peele, whose father is black, was raised by his white mother in New York City. Key is also biracial, and was adopted by a black man and his white wife and raised in Detroit. And being biracial has definitely influenced their comedy.

Although Peele remembers growing up in a cosmopolitan, multicultural environment, Key grew up in one marked by segregation and white flight; a black city that had been a white city not so long before. He was sometimes ostracized by black classmates when they learned that his mother was white.

"For me it was very hard and rough. When you're a child, the most important thing is to be able to live a life of comfort. You want to be sure that the moon goes up at night and the sun comes up in the morning and dad comes home from work. At school it was not comfortable," Key remembers. "My mom would come by my school to bring me lunch – my mom is a cute, ruddy little white woman, and there's no category for that – the kids don't know how to respond, and so they tease: 'That ain't your mama!' 'Why you talk white?'  It's not to say that every child in grade school talked to me that way, but that's what I remember.”

Their comedic work stretches and tests the limits and definitions of what it is to be black, to be white, to be both - and to be neither.

"Since a young age, we’re asked to categorize ourselves on these standardized tests, to mark a box: white, black, other," Peele said. "To make me ponder that as a child, and make somebody put me in that category and say 'That’s what you are' – what could possibly be so important that we're ingraining upon a 7-year-old that 'This is what you are and you can’t be anyone else?'"

It's only recently that Peele began to self-identify as biracial, and to define for himself what that means. He says it's an identity that recognizes his black heritage as well as the white mother who raised him.

"Growing up, until really last year, I don't know that I would have readily brought up my white mother to anyone," Peele said. "It was not something I'm embarrassed by, but to announce that was synonymous to some black people to saying, 'I think I'm better than you.' This whole thing has felt almost like a coming out as biracial – saying this is a thing, we exist, and this is a future."

Both honed their comedic craft in various sketch comedy troupes – Key with Second City Detroit and Second City Chicago; Peele with Second City Chicago, ImprovOlympic and the Boom Chicago Theatre in Amsterdam. Each eventually ended up on MADtv, a sketch comedy show on the Fox network, where they performed for several seasons before the series ended in 2007. They bonded over their similar backgrounds, and birthed some of the series’ more memorable characters: Coach Hines, Sad Fitty Cent, the Superstitious Knights.

"Key & Peele" is inevitably compared to Comedy Central’s most successful sketch comedy show fronted by an African-American – "Chappelle’s Show." Standup comedian Dave Chappelle also tackled race and racism, and Key and Peele say they are inspired by his work.  But where Chappelle’s skits on race are overtly from the perspective of a black man, Key and Peele’s play on the idea that they are men who society perceives as black who are also in the position of proving their blackness. At the same time, they question the definition of blackness.

Their work often aims to turn stereotypes on their head. For example, one sketch shows two black men sitting in a darkened movie theater, yelling at the screen – a reference to stereotypes of black people talking too loud during movies. But the hecklers are actually making learned critiques of the movie’s cinematography and directorial choices.

In one stand-up routine Key and Peele talk about situations where they have to "adjust" their blackness – dialing it up or down depending on whether they're going to be judged by whites or blacks. But they also subtly call into question the idea that speech patterns should correlate one way or another with skin color. 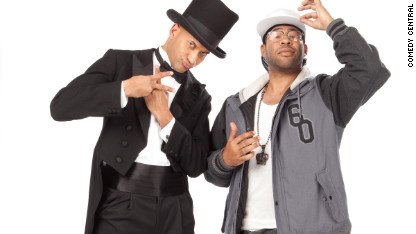 Key and Peele see their work as deconstructing stereotypes

"You never want to be the whitest-sounding black guy in a room," Peele tells the audience.

The show has been well- received critically, with The Atlantic calling it "a worthy successor to 'Chappelle's Show.'" But it has its critics. Kartina Richardson, writing for Salon, said the show lacked Chappelle’s edginess and tried too hard to appeal to the "white liberal" view of a post-racial world.

"Key and Peele fail to ever address the violence of racism, literal or figurative, and this timidity leaves their material lifeless," said Richardson.

Other critiques, like those expressed in a recent Loop21 article by John S. Wilson, position Key and Peele as outsiders, trying to make their money off making fun of black people while reminding white viewers that they’re not really black, but half-white and therefore more acceptable.

It's an accusation that bothers Key, who resents the implication that their biracial identity means they  are somehow not black enough to do "black" comedy, or that in writing sketches with black characters they are co-opting a culture that isn't wholly theirs. Including a stereotype in a sketch gives viewers a chance to examine it, he said.

"If you laugh, then you cannot deny that this just took place, and you have to examine what just happened in the sketch," Key said.

Key and Peele’s comedic alter egos – or is it opposites? – are Vandaveon and Mike, two crude everymen who respond to Key and Peele episodes with YouTube suggestions for making them, in their mind, funnier. The usual suggestions involve making the show more lowbrow – going for jokes that exploit stereotypes rather than deconstructing them (like having the South Asian doctor character in one sketch reach into his filing cabinet and pull out a plate of tikka masala for no apparent reason, and using it as an entry point for fart jokes.)