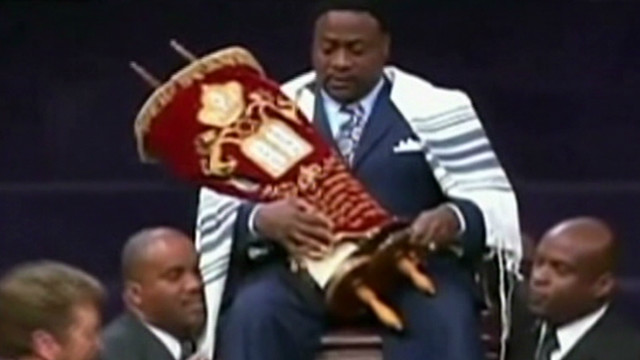 Bishop Eddie Long holding an alleged Torah scroll. He was also wrapped in it and declared "king."
February 26th, 2012
07:00 AM ET

Editor’s Note: Rev. DeForest "Buster" Soaries is the senior pastor at First Baptist Church of Lincoln Gardens in Somerset, New Jersey. He is a former Secretary of State of New Jersey, and was featured in "Almighty Debt: A Black in America Special.”

(CNN) - When I was a child, if a crime were committed, my grandmother would say, “I hope he wasn’t colored.” Her concern was that all African-Americans suffered whenever one of us was caught doing something wrong. In those days black people raised their children to abstain from behavior that would give credence to the stereotypes that society had used to characterize us and justify the injustices heaped upon us. And most of us embraced that ethic.

Today I understand how my grandmother felt – not so much from a racial perspective but rather from a vocational perspective. As a member of the clergy, I am always hoping that an accused child molester or an embezzler from some community organization is not a member of the clergy. In 1982, the Gallup organization reported that 63% of people surveyed felt that clergy had high or very high honesty and ethical standards. This topped a list of various professions including lawyers (25%), members of Congress (15%) and car salespersons (6%). By 2011, Gallup reported that nurses topped the list of those believed to have high or very high levels of honesty and ethical standards with 84% believing they did. Lawyers dropped to 19%; members of Congress dropped to 7%.  Lobbyists and car salespersons were also at 7%.  And clergy dropped to 52%. That means that almost half of the people surveyed do not feel that members of the clergy are honest and have high ethical standards.

And I am not surprised. The inappropriate antics of many clergy could easily cause one to wonder if there are any moral standards for those who preach and teach morality. We are all too familiar with the flaws among some Catholic priests and their highly publicized breaches of trust and sexual indiscretions with children. But Protestants have our share of disgraces in the pulpit, too. Homosexual bashing pastor Ted Haggard left his giant church in 2007 following a gay sex scandal. He later admitted to GQ, "I think that probably, if I were 21 in this society, I would identify myself as a bisexual." Prosperity preacher and television evangelist Robert Tilton was accused of throwing away prayer requests that he received from donors and television viewers without even reading them. And mega-church pastor Eddie Long settled lawsuits with four young males who accused him of coercing sex acts. It is time for a remedy within Protestant churches.

END_OF_DOCUMENT_TOKEN_TO_BE_REPLACED

Opinion: From role player to team leader: Jeremy Lin and the rise of Asian American leadership

Editor's Note: Scott Kurashige is a fourth-generation Japanese American and author of The Shifting Grounds of Race: Black and Japanese Americans in the Making of Multiethnic Los Angeles. He is associate professor of American Culture and History and director of the Asian/Pacific Islander American Studies Program at the University of Michigan.

By Scott Kurashige, Special to CNN

(CNN) –When I was growing up, one of the most admired athletes among my friends and family in the Asian American community was baseball player Lenn Sakata, part of the Baltimore Orioles 1983 World Series champion team.

Never heard of him? That’s understandable.

One would have to be generous to call Sakata a “modest” success with his .230 batting average in eleven seasons playing professional baseball.

But examples of Asian American pro-sports prowess were so scarce, that we all rooted for Sakata.

The fourth-generation Japanese American was the archetypal role player, never doing anything flashy or heroic but proving he belonged in the major leagues.

And that was enough for us to be proud, especially the older generations of Japanese and Asian Americans whose struggle for acceptance had been thwarted by government acts that denied Asian immigrants the right to become naturalized citizens and forced Japanese Americans into internment camps.

Thoughts of Sakata have popped into my mind repeatedly while watching the meteoric rise of Jeremy Lin, the NBA’s first Taiwanese-American player and the league’s first Asian American marquee star.

Before his breakthrough game on February 4, Lin seemed destined to a career that would parallel Sakata’s at best.

Since then, Lin has repeatedly exploded expectations while performing under tremendous pressure on and off the court.

Because his story is unprecedented, it has opened our eyes to a new day filled with new possibilities. END_OF_DOCUMENT_TOKEN_TO_BE_REPLACED