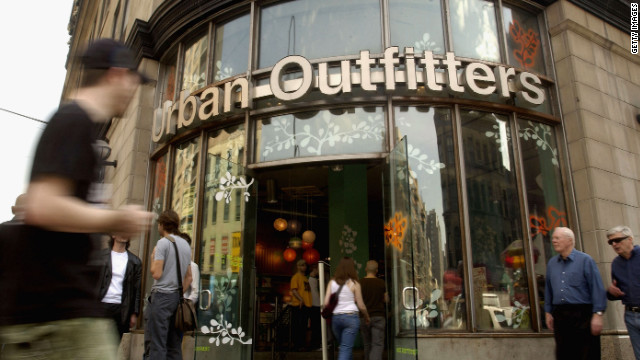 Urban Outfitters specializes in bohemian fashion, but their appropriation of Native American designs has resulted in a lawsuit.
March 2nd, 2012
04:57 PM ET

(CNN) – The Navajo Nation is suing hipster clothing and accessories retailer Urban Outfitters for using the Navajo name and motifs in their products without permission – a practice that they say takes away millions of dollars from the tribe and its members.

The lawsuit alleges that Urban Outfitters' use of the name "Navajo" in its products "deceives and confuses consumers" and "is designed to convey to consumers a false association or affiliation with the Navajo Nation, and to unfairly trade off the fame, reputation, and goodwill of the Navajo Nation’s name and trademarks."

One of the laws under which the tribe is seeking redress is the Indian Arts and Crafts Act, a federal law that makes it illegal for non-Indian businesses to misrepresent a product as being made by a Native American tribe or person.

"When Congress amended the Indian Arts and Crafts Act of 1990, it did so after studies showed that 'fake' Indian products were siphoning millions from the market for products created by citizens of federally recognized tribes," said Kristen Carpenter, a professor of law at the University of Colorado who specializes in Native American property rights.

According to a June 2005 report by the Department of the Interior, which houses the Bureau of Indian Affairs, estimated that indigenous artisans lose $400 million to $500 million a year to sales of counterfeit products.

"For some of our Navajo or native artisans, that's what sells their products. Attaching the name Navajo to their item generates income," said Erny Zah, director of communications for the Navajo Nation's Office of the President. "To the larger world, we are Navajo, and we take pride in being Navajo… We don’t want our name to be associated with anything that isn’t Navajo."

The suit, filed Tuesday, in U.S. District Court in New Mexico, lists a number of products it says are a problem– including silver jewelry, backpacks, shirts, tote bags and underwear. But it calls out Urban Outfitters' marketing of a flask as "Navajo Flask" as especially "derogatory and scandalous," because the Navajo Nation expressly forbids its name to be used in connection with products related to alcohol and bans the sale, manufacture and consumption of alcohol within its borders. According to the National Survey on Drug Use and Health, American Indians and Alaska Native adults have higher-than-average rates of binge drinking. And according to data provided by the Department of Health and Human Services, Native Americans are five times more likely than whites to die of alcohol-related causes.

A cease-and-desist order filed last fall resulted in Urban Outfitters removing Navajo references in descriptions of some items, but in-store displays in some shops selling its products as well as the online store for the Free People brand continued to label or reference "Navajo" or "Navaho" in describing some items.

"The use of Indian names and imagery without consent of the relevant Indian nation diminishes both critical opportunities for economic development and, as importantly, for tribes to represent themselves consistent with cultural norms and traditions, both ancient and contemporary," said Carpenter. "The Urban Outfitters case is particularly unfortunate in light of the beautiful and high-quality goods produced by Navajo artisans, readily available for purchase by consumers seeking real Navajo products."

The Navajo Nation is asking for monetary damages, a share of the profits made on falsely branded products and an injunction that would forbid Urban Outfitters or any of its subsidiaries from using the name "Navajo" in its products or marketing materials.

Urban Outfitters did not respond to calls seeking comment.