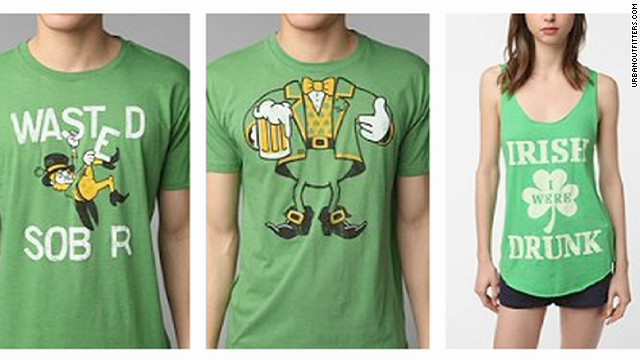 Leading up to the March 17th holiday, the hipster-oriented clothing company is selling 33 products ranging from t-shirts to shot glasses in its St. Patrick's Day Shop.

Of those, 23 reference drinking.

A $24 scoopneck tank reads: "Irish I Were Drunk." "Leprechaun Piss" is emblazoned across an $18 growler. A $20 trucker hat captioned "Irish Yoga" and "Downward Facing Upchuck" depicts a hungover stick figure on all fours, vomiting four-leaf clovers.

Seamus Boyle, president of the Ancient Order of Hibernians in America, a large Irish-American organization, wrote an open letter to Urban Outfitters founder Richard Hayne demanding that he "immediately remove the disgusting products you have for sale in your stores depicting the Irish as drunks and defaming the Irish Nation and the Patron Saint of Ireland, St Patrick."

"I ask, would you have the same type of garbage depicting the African American, Jewish or Muslim Nations emblazoned on your product? I think not." Boyle also announced that he plans to call for a boycott of the retailer.

Urban Outfitters did not respond to repeated requests for comment.

The merchandise has also raised eyebrows in Washington.

While acknowledging that Irish and Irish-Americans "often revel in self-deprecating and blunt humor," the legislators said the apparel represents "a step too far, crossing a line into stereotyping and denigration."

The legislators also took issue with the shirts' seeming endorsement of binge drinking. Citing a World Health Organization statistic that 2.5 million people die each year from alcohol-related causes, the Congress members wrote that binge drinking "is no laughing matter."

Shoppers browsing the racks at a midtown Manhattan Urban Outfitters on Tuesday were split on the Irish Yoga hat.

“Some people need to lighten up,” said Bill Halliwell, adding that his wife is Irish. His only problem with the hat, he said, is that “it’s just not that funny.”

To Stacey Jay, 20, the hat was plainly in poor taste. “That’s definitely offensive and very disrespectful.” She was not offended enough to join any boycott of the store, though.

A store manager declined to comment on how the hats are selling.

The Irish aren’t the only ethnic group to bristle at Urban Outfitters merchandise this month. In a suit filed in federal court last week, the Navajo Nation said the chain’s use of the Navajo name and patterns in products “deceives and confuses consumers,” costing actual Navajos millions.

Previously, the retailer gained negative attention for selling a Monopoly-like board game called “Ghettopoly” and, in 2010, after a Henley t-shirt at its online store was offered in the color “white/charcoal” and “Obama/black.”

People of Irish descent in America go through some version of controversy every year around St. Patrick’s Day, which began as a Catholic feast day commemorating the saint who purportedly drove the snakes out of Ireland.

The holiday’s current celebration in the United States has grown into one that aims to recognize Irish culture and contributions more generally.

But marketing campaigns by beer and liquor companies, restaurants and bars often reference St. Patrick’s Day as a chance to “be Irish” by adhering to a stereotype of the Irish as alcoholics and binge drinkers.

The association of St. Patrick’s Day with stereotypical drunken Irishmen is not new. In 1867, “The Day We Celebrate,” a cartoon by the famous American caricaturist Thomas Nast, depicted St. Patrick’s Day as a chance for "ape-like" Irishmen to get drunk and fight.

Stephanie Siek contributed to this report.