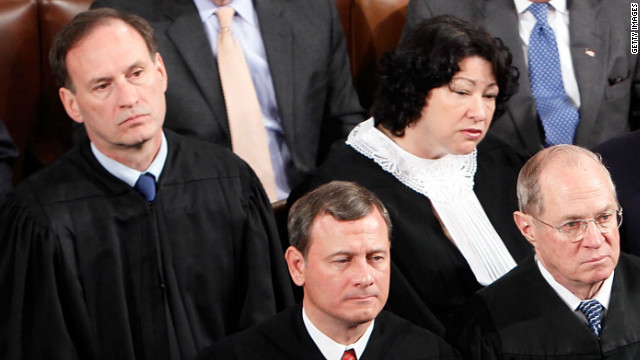 Justices Samuel Alito and Sonia Sotomayor, John Roberts and Justice Anthony Kennedy at the 2010 State of the Union.
March 7th, 2012
10:30 AM ET

San Diego (CNN) - Now that we have Sonia Sotomayor, a Latina, on the Supreme Court, the esteemed body will soon find itself in the middle of a telenovela.

The storyline involves the contentious issue of affirmative action, which is central to Fisher vs. University of Texas, a case that is scheduled to come before the court this fall. It will cast a spotlight on two of the court's justices: Sonia Sotomayor and Samuel Alito. Affirmative action seems to be intensely personal to both of them, though for very different reasons.

First, let's take a minute to note just how similar Alito and Sotomayor are in terms of their background. Both are baby boomers, born just a few years apart. Alito is 61 years old and Sotomayor is 57. They grew up in neighboring states. Alito is from New Jersey and Sotomayor is from New York. Both came from ethnic, working-class families. Alito's parents were teachers, Sotomayor's father was a tool-and-die worker and her mother was a telephone operator. Finally, both went to Princeton University and Yale Law School, where both served as editors of the Yale Law Journal.