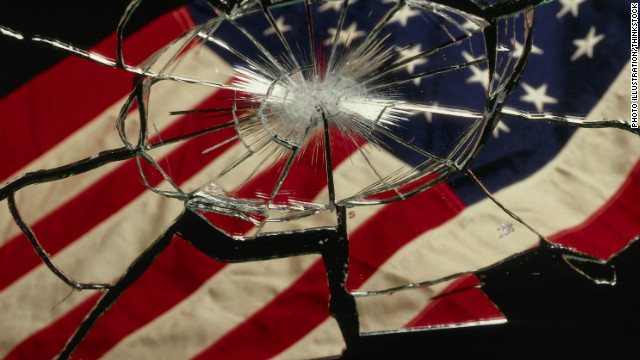 (CNN) - The number of anti-government groups in the United States grew dramatically in 2011 for a third year, fueled by a rising tide against President Barack Obama, the struggling economy and illegal immigration, a report released Thursday finds.

The three-year trend amounts to an "astounding" 755% growth since 2008, according to the Southern Poverty Law Center report "The Year in Hate & Extremism: The Patriot Movement Explodes."

The report attributes the growth to "superheated fears generated by economic dislocation, the changing racial makeup of America, and the prospect of four more years under a black president who many on the far right view as an enemy to their country."

Since its start in 1994, the so-called Patriot Movement has fluctuated in size based on political events - peaking in 1996 after the Oklahoma City bombing before fading to relative obscurity in 2000, according to the report. Its most recent rise can be traced to late 2008 - the start of the economy's collapse and the election of Obama as president.

"Even as most of the nation cheered the election of the first black president that November, an angry backlash developed that included several plots to murder Obama," the report says. "Many Americans, infused with populist fury over bank and auto bailouts and a feeling that they had lost their country, joined Patriot groups."

The SPLC pointed out a particularly alarming rise in the "sovereign citizens movement," what it calls a subset of the Patriot Movement.

"Sovereign citizens, whose ideology first developed in white supremacist groups, generally do not believe they are obliged to pay federal taxes, follow most laws, or comply with requirements for driver's licenses and vehicle registrations," the report says. "They also typically believe that filing certain documents can relieve them of debt or bankruptcy proceedings or even bring them millions of dollars from secret government accounts."
High-profile arrests have been made in recent years to stop alleged plots against law enforcement officers from being carried out by suspected militia groups:

- Nine members of the Michigan-based Hutaree militia were arrested and charged in March 2010 with seditious conspiracy, attempted use of     weapons of mass destruction, teaching the use of explosive materials and possessing a firearm during a crime of violence.
The government said alleged ringleader David Stone Sr.'s plan was to create his own country carved out of four Michigan counties, then defend that country against attack by the "One World Order" army. The group allegedly planned to incite that attack by making a false 911 complaint, shooting any police who responded and then attacking attendees at the funerals of those officers with improvised explosive devices.

- An alleged plan by followers of the Alaska Peacemakers Militia to kill state troopers and a judge was thwarted in March, according to the SPLC.

- Four men were arrested in November in an alleged plot to kill government workers and produce a deadly biotoxin to spread on highways in several major U.S. cities. FBI agents identified them as part of a fringe militia group.
In addition to the rise in anti-government groups, the number of hate groups operating in the United States also grew in 2011, though less dramatically, from 1,002 in 2010 to 1,018 last year.

Bucking that trend, however, was a substantial drop in the number of "nativist extremist" groups - "organizations that go beyond normal political activist to harass individuals they suspect of being undocumented immigrants."

That drop, the report says, can be attributed in part to an increase in hard-line anti-illegal immigration legislation in states such as Alabama and Arizona.

Still, the report warns that the American radical right movement could continue to grow if Obama is re-elected to a second term.

"If he wins re-election next fall, the reaction of the extreme right, already angry and on the defensive as the white population diminishes, could be truly frightening," the report concludes.

The Montgomery, Alabama-based SPLC is a nonprofit organization that works against racism and intolerance.