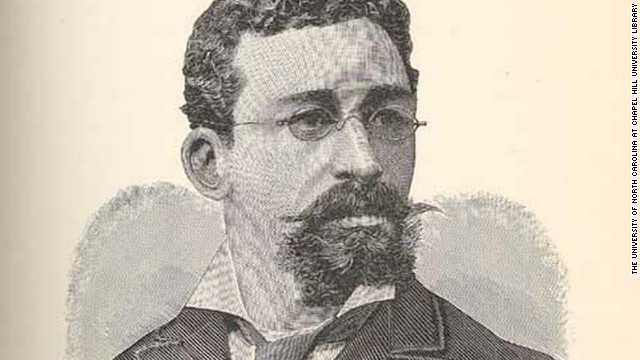 The recent discovery of Richard Greener's papers could fill some of the gaps in his biography.
March 14th, 2012
01:44 PM ET

(CNN) – The story of Richard Theodore Greener is a book with many blank pages. The first African-American to graduate from Harvard University in 1870, he was one of the foremost black thinkers of his time, rising to prominence between Booker T. Washington and W.E.B. DuBois and praised by both. Greener was the dean of Howard University's law school, a diplomat and also the University of South Carolina’s first black professor and head librarian.

The recent discovery of some of Greener’s papers in Chicago could fill in some of those pages. But the ironies of his life remain.

One daughter of this book-loving man and advocate for racial equality would go on to become the most respected librarian of her era and an expert on medieval illuminated manuscripts – but not as a woman of color. Belle Marian Greener, who was born to Greener and his first wife, Genevieve Ida Fleet, passed for white. Even lighter-skinned than her two light-skinned African-American parents, she changed her name to Belle da Costa Greene to reflect a fabricated Portuguese ancestry that would explain her complexion.

After separating from Fleet, Greener accepted consular appointments in Bombay (now Mumbai), India and Vladivostok, Siberia, but neither Fleet nor their children joined him. Da Costa Greene burned most of her personal papers before her death in 1950, and except for a possible visit with her father after his retirement in Chicago, the degree to which she and Greener kept in contact is a mystery.

While working as an American consular official in Vladivostok in 1898, Greener began a relationship with a Japanese woman, Mishi Kawashima, with whom he had a daughter and two sons. He then had to leave them behind in Vladivostok in 1906, when he was the victim of a rumor campaign that resulted in his retirement.

It’s possible that racism played a role in his reasons for leaving the post, said Michael Mounter, a historian and research librarian at the University of South Carolina who wrote his doctoral dissertation on Greener. Among the rumors flying at the time, Mounter said, were that he “was drinking too much and had a Japanese mistress.”

“You had a group of white Americans living in Vladivostok and he originally went to social events with them,” said Mounter.  “He did not identify himself specifically as being black. He didn’t want to, he didn’t see the point in it.”

“One might say, ‘Well, he was passing for white.’ Others might say he just wanted to be judged on his own merits,” said Mounter.

Greener tried to get another diplomatic appointment somewhere in Asia after his dismissal so that he could be reunited with his family there, but it didn’t work. His children with Kawashima grew up apart from him and probably never knew of his African-American heritage. Kawashima eventually remarried, to a British man.

According to a Sunday article in the Chicago Sun-Times, a contractor found a trunk full of old documents and photographs while he was preparing an abandoned house for demolition in 2009. On a hunch they might be important, he gathered up some of them and brought them to an expert on books. Told that the documents belonged to Greener, the contractor, Rufus McDonald declined the expert’s offer to purchase them. McDonald later went back to the house to get the other contents of the trunk, but by then the house, in the south side neighborhood of Englewood, had been razed to rubble. He's held on to them since then, hoping to sell them to an institution that will appreciate Greener's place in history. The rescued documents include Greener's  Harvard diploma, his license to practice law, and some others related to his friendship with President Ulysses S. Grant and work in Russia.

“He was one of the leading black intellectuals in the late 19th to early 20th century,” said Mounter. “He comes along a time when Frederick Douglass is an elder statesman, and Booker T. Washington and W.E.B. Dubois are not really leaders yet; they’re becoming leaders but not quite there.”

In 1894, Greener published one of his most notable essays, “The White Problem,” in which he recast the so-called “Negro Problem” as one of discrimination practiced by whites who needed to change their behavior.

“A phase of the white problem is seen in the determination, not only to treat the Negro as a member of a child-like race, but the grim determination to keep him a child or a ward,” Greener wrote. “In every advance, since emancipation, it has with true Caucasian gall, been assumed that everything must be done for him, and under no circumstances must he be allowed to do for himself. In religion, in politics, in civil and social life, he must be developed in a pen, staked off from the rest of mankind, and nursed, coddled, fed and trained by aid of the longest spoons, forks and rakes obtainable… Indeed nothing has so weighed upon the average American Christian heart as the precarious health of this infant, whom no one had the heart exactly to kill, were it possible, but whose noiseless and peaceful departure to a better world, would have been hailed with smothered sighs of intense relief.”

The discovery of some of Greener’s papers in that attic could fill some of the gaps in his biography. But it also brings up some tantalizing questions. How did the papers end up in the house, six miles from the Hyde Park house where Greener was known to be living when he died? How did they come to be abandoned? What else was in that old steamer trunk?

Mounter suspects the trunk might have been one that Greener thought been lost in the 1909 San Francisco earthquake, as he wended his way home from Siberia. It might have eventually been returned to Greener or one of his sisters, and ended up in the attic of the Hyde Park house. The trunk might have then passed into the hands of other relatives, who took the trunk with them and later moved toEnglewood. The last owners of the house may not have even known it was there, or its significance.

“So that happens, and when things are gone, they’re gone,” Mounter said.

Mounter hasn’t seen any of the rescued documents himself – they’re still in the possession of the contractor – but he thinks they might yield clues about Greener’s relationship with both his families and his career as a diplomat.

Bausman said that her grandmother, Mishi Kawashima, Greener's common-law wife, first met him in Washington while she was working for a Russian diplomat. She had begun working for the diplomatic office in Nagasaki, Japan, and being fluent in Russian, English and Japanese, she was apparently invited to continue working with the diplomat during his stay in America.

Kawashima didn’t expect to meet Greener again, Bausman said, but as fate had it, they both found themselves inVladivostok at the turn of the century. It’s not known if they married officially, but Bausman and Mounter say it’s clear that they considered each other husband and wife. But after Greener’s departure, Kawashima was heartbroken, and rarely spoke of him to her children, including their eldest daughter and Bausman’s mother, Olive. Bausman recalls visiting her grandmother near the end of her life, and the guarded answers she supplied to Bausman’s questions.

“My grandmother did not want to talk about him,” Bausman said. “She said he never told my mother that she was [part] black. But I know from her (Kawashima’s) directive that she herself never wanted to come to theUnited States, I think because she knew he was black and that they would be treated badly.”

Bausman herself, who grew up in Asia and Europe, didn’t learn that Greener was African-American until she moved to the United States as an adult. She had assumed her American biological grandfather was white. Strangely enough, the one time her family's heritage was questioned, it was for entirely different reasons. Her mother Olive, whose looks were racially ambiguous, had married a German man. The family was living in Germany just as Adolf Hitler was coming to power. Olive was forced to prove to authorities that she didn't have any Jewish ancestry in order to avoid persecution.

“So she wrote to Harvard, and asked if they could write whether her father was Jewish.  And they wrote back – they didn’t say he was black, but they said as far as they knew, he was not Jewish,” Bausman said.

Olive began corresponding with Greener when she was in her teens. They kept in touch until his death in 1922. Bausman said that her mother considered the Englishman that Kawashima had married after Greener’s departure to be her “real” father, but there was clearly some love between Greener and Olive in their letters to each other.

“They were all very affectionate and (Greener was) asking about her younger brothers and so forth,” said Bausman, 75. “But she was part of a chapter of his life that had ended.”

Mounter believes there is still much to be learned from Greener, who spent the last decades of his life as an speaker on the literary and political circuit. According to FindAGrave.com, he's buried in Chicago's Graceland Cemetery.

"The interesting thing for me about him is that he never quite made it as a black leader (at the status of) Booker T. Washington or DuBois," Mounter said. "I was thrilled to hear about the find of the documents, and disturbed to hear that the steamer trunk and much of the contents were lost.  The items recovered are wonderful... Whatever happens, these papers need to be taken somewere where they can be preserved."