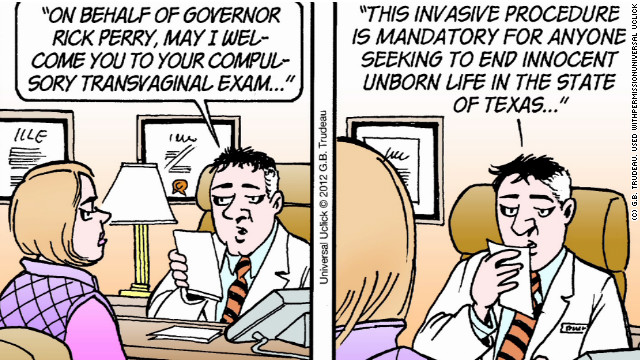 Opinion: Why 'Doonesbury' gets it wrong

Editor's note: Melinda Fredricks is vice chairwoman of the Republican Party of Texas and a member of the Texas Federation of Republican Women. In 2008, she was appointed by Gov. Rick Perry to the Texas Alcoholic Beverage Commission. In 2003, Perry appointed her to the Texas Medical Board, which licenses and disciplines physicians.

By Melinda Fredricks, Special to CNN

(CNN) - Despite opponents’ claims to the contrary, the real controversy concerning the newly enacted Texas Sonogram Law is that it took an act of the legislature to give women considering an abortion the information they deserve about this medical procedure.

Nonetheless, Garry Trudeau decided to make some ugly mischaracterizations of the law in his “Doonesbury” comic strip.

If it weren’t for the damage his misinformation could create, many Texans would just laugh at Trudeau’s ignorance. For one thing, he seems to think our legislature is made up of only middle-aged GOP men. The 21 women legislators who voted for the bill take issue with that, I’m certain. And while the bill was passed overwhelmingly by Republicans, without bi-partisanship the bill could not have passed the Texas Senate.

However, Trudeau’s misinformation crossed over into just plain nasty when he characterized the Texas Sonogram Law as rape. Disappointingly, a brilliant and talented woman such as former ABC news anchor Carole Simpson defended him in her recent article on this site.

Simpson’s argument is based on a statement that a vaginal sonogram is necessary in order to obtain the information required by the law to be given to the patient, and she alleges it “may even damage the reproductive organs of women who dare to seek an abortion.” This begs the questions, if a vaginal ultrasound is so dangerous, then why in the world did the FDA approve it, and why does the National Abortion Federation recommend it as a standard of care for some first-trimester medically induced abortions?

Moreover, in her article Simpson describes Trudeau’s work: “Another strip shows a doctor about to perform the procedure (emphasis mine), and the bubble of words coming from his mouth says, ‘By the authority invested in me by the GOP base, I thee rape.’” I got to wondering which “procedure” is Simpson referring to – the sonogram or the abortion? Because on Planned Parenthood’s website,  I found that an abortion requires several things to be put into a woman’s vagina and I quote:

During an aspiration abortion:
o A speculum will be inserted into your vagina.
o Your health care provider may inject a numbing medication into or near your cervix.
o The opening of your cervix may be stretched with dilators — a series of increasingly thick rods.
o A tube is inserted through the cervix into the uterus.

And Simpson is outraged over a vaginal sonogram being given before an abortion? (By the way, Planned Parenthood assures women that a vaginal ultrasound is not painful.)

The fact is, the Texas law simply increases the standard of care for informed consent for abortion to the same level that is common for other medical procedures. The principle of “informed consent” is well-entrenched in state law for other medical procedures. But the abortion industry opposes attempts to provide their patients the same amount of information patients might routinely be given for much less invasive procedures. In its clinical guidelines, the National Abortion Federation states that “The findings of all ultrasound exams and the interpretation of those findings must be documented in the medical record.”  Before the Texas Sonogram Law was enacted, abortion providers weren’t sharing those results of the sonogram with the patient.

Sonograms were already routinely conducted by abortion providers before the Texas Sonogram law and the National Abortion Federation recommends vaginal sonograms as standard of care in many first trimester abortions. The Texas Sonogram law simply requires that the doctor provide the patient the opportunity to view that sonogram and to hear the baby’s heartbeat, as well as provide state specified printed materials, and a verbal explanation of the sonogram results.

Moreover, contrary to Simpson’s claims, women who do not wish to see the sonogram image or hear the fetal heartbeat may simply sign a waiver stating they declined to view the information. In the event of a medical emergency, the doctors’ requirements can be bypassed with proper documentation.

Indeed, prior to this law, doctors often performed abortions without ever meeting the patient or even speaking with her. The law requires that a physician who is to perform the abortion meet with the patient at least 24 hours before the abortion is to take place. The doctor must provide basic information to the patient, including medical risks associated with the type of abortion to be performed, probable development age of the unborn child, as well as the medical risks to carrying the child full term.

Simpson says Trudeau believes there is a war on women, and maybe Trudeau is right. But we have differing opinions on who the enemies might be. During the testimony in support of this legislation, several women testified they had been denied an opportunity to view their sonograms at Texas abortion facilities, an egregious violation of their rights as patients. The Texas Sonogram Law simply ensures that physicians offer women undergoing abortion a similar level of informed consent already being provided for other medical procedures in Texas. I’m proud that Texas believes women are strong and smart enough to know the full truth before making such a critical decision. The only thing disappointing about the law is that it was even necessary at all.

The opinions expressed in this commentary are solely those of  Melinda Fredricks.