My son knows he could be Trayvon

Editor's Note: Christy Oglesby is the quality assurance manager for CNN/U.S.  She lives in Atlanta with her 13-year old son, Drew.  She wrote this in 2012 when the U.S. Justice Department decided to investigate Trayvon Martin’s death. We're resurfacing this piece in light of  a verdict in the George Zimmerman case. Listen to a CNN Radio interview with Oglesby and her friend, Sandra Bemis, whose son is pictured above.

(CNN) - I spend a lot of time gasping. I’m the mother of a boy, a testosterone-poisoned boy. Whether it’s rock climbing or four-story tall cliffs that beg him to jump to the sea, my son just isn’t interested in activities that don’t require me to sign a waiver promising not to sue someone.

I spend a lot of time praying. I have to. My son is black. His race gives me much more to fear than his fearlessness. Today, people are learning that the U.S. Justice Department will investigate Trayvon Martin’s death. That’s the black Florida teenager who was killed by a neighborhood watchman last month.

Trayvon didn’t have a gun. He was just walking home from a convenience store to the home of his dad's fiancee. The neighborhood watch captain said Trayvon looked “suspicious.” George Zimmerman said he shot Trayvon in self defense. I’ve worried about my Drew dying like that since a few days after giving birth to him 13 years ago.

It’s tough finding the balance between encouraging a black boy to storm the world with confidence and at the same time to fear for his life. But that’s what I must do. I know that at this very moment some have just sucked their teeth in disgusted disbelief and decided that I’m exaggerating. I wish that I was. I’m not. If I were, Trayvon would be alive.

There are too many things, big and small, that indicate the world hasn’t changed enough since Emmett Till died in 1955. There’s James Craig Anderson, a black man in Mississippi. A video camera captured white teens running him over in a truck on June 26, 2011 after one of them allegedly said he wanted to “F- with a n-–.”  There’s Sean Bell. There’s Trayvon. And there’s my son. 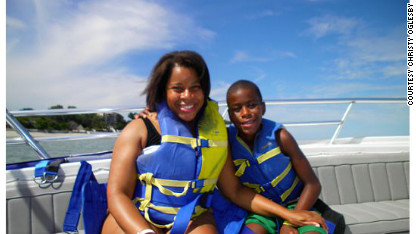 Christy Oglesby and her son, Drew.

Drew was only 3 when I got confirmation that being black could be the death of him. We were waiting for a connecting flight in a Tennessee airport. Drew was on the floor with his Leap Pad, a small computerized storyteller that developed early reading skills. He had on a navy and white seersucker romper with exquisite smocked trains on his chest. His navy Stride Rite leather sandals didn’t have a scuff on them, and the five-day-old haircut still looked fresh. He was the personification of perfection… at least to me.

A little white girl who looked about 2 and a half trotted over and plopped down on the floor next to him. Drew was just about to slide half of the toy onto her lap so they could “read” together when her older sister charged over. I’m guessing she was 6.  “Come back here!” she yelled. As she pulled her sister up off the floor by the arm, she explained loudly, “Don’t play with him! He’s dirty and dangerous!”  My child was neither. It didn’t matter. He’s black. For some people, that’s synonymous with “threat.” If that weren’t true, Trayvon would be alive.

I’ve repeated the details of that incident to my son several times in the past ten years. I’m convinced that his very life depends on knowing that story even if he can’t remember it. I hadn’t told my son the “airport story” since Cambridge cops arrested Skip Gates. I had to remind my son that the right neighborhood and the Yale degree he hopes to earn won’t be enough to protect him. Trayvon’s death forces me to revisit what happened when he tried to read to that little white girl.

Maybe I shouldn’t keep reminding Drew about the risks that come with being black and male in America. It’s just the best that I can do under the circumstances. That story is a part of the “tool kit” I’ve cobbled together to help him stay alive. It’s as important as my “proverbs.” That’s what my son calls my pithy reminders of how he should dress, act, speak and respond to authority. He’s committed most of them to memory.

“Ann is a woman, not a conjunction.” “Make inside voice your choice.” “Disobedience is dangerous.” And of course, “You must always look like a prospect, not a suspect.” The latter one shakes my core.  Drew and Trayvon have a similar look. Their coloring, eyebrows, smile, face shape and hair cuts are just too eerily similar for me. And I see that looking decent doesn’t trump being black. If it did, Trayvon would be alive.

Today I read about Trayvon trying his best not to run when he thought Zimmerman was hounding him. A friend says she was on the phone with Trayvon before he died, and that’s the account she gives. I don’t know Trayvon’s momma. But it seems she likely had the same proverb for her son that I had for mine. “Never run in a neighborhood.”

My son broke that rule when he was 7. He was Scouting for Food with the Cub Scouts on a service project in Buckhead, a posh McMansion neighborhood in Atlanta. Before I could stop him, he was running across the lawn of a mansion with the other little boys in blue uniforms. My scream stopped him in his tracks. I wasn’t so scared about him running just then. I was terrified that he’d forgotten the rules. I was terrified that he’d be with his white friends eight years from then and think he could run.

My ex-husband is 6 feet 2 inches. Drew’s half-brother is 6 feet 4 inches. My child’s only 12 and already 5 feet 5 inches. He’s black. He’s male. He’s going to be big. That’s just too much for my heart to handle. We had the talk again. “I know. I know, mom. I can’t run because I’m black.” I know America is the land of liberty, but my child has to understand he’s just free-ish.

Thankfully, I have a few more years before Drew begins to drive. I don’t want him to become another Troy Lawrence Jr. He’s a young, black, honor roll student from my hometown. Jefferson Parish deputies stopped him for speeding several years ago. Within the hour, his face was swollen, black and blue. Just about the time I begin teaching Drew how to parallel park, I’ll have to explain how to respond to a traffic stop. I’ll add Troy’s story to the tool kit.

Drew’s not bowed by fear at all. When he was 8, I told him that he needed to choose the scripture that would guide his life. My daredevil boy chose Joshua 1:9 - "Have I not commanded you? Be strong and courageous. Do not be afraid; do not be discouraged, for the Lord your God will be with you wherever you go.”

He’s diligent about heeding my proverbs and exercising self-control. He knows that his manners, diction, hair style, clothing choices and education will help curtail some assumptions about him, but not all. He knows that he could be Trayvon. He’s still shocked that Zimmerman is not in jail.

In spite of my fears, I see reasons to be hopeful. I caught a beautiful glimpse just this weekend. My son’s Boy Scout troop camped on a family’s farm, and the moms had shunned nature for the comforts of the main house on the property. Through a kitchen window, I saw my son walking up the hill toward the house with a boy who has been his buddy since kindergarten. They share a secret handshake. Like so many other times in their lives, they had thrown an arm across the other’s shoulder, and there wasn’t enough space between their torsos to slide a blade of grass.

The genuine affection between long-time friends was evident. I don’t know what they were talking about, but they looked happy. They both looked free. I knew Drew didn’t see a white face, and his partner didn’t see a threat. Each saw a friend. That didn’t make me less scared for my son. I won’t stop warning him of risks. I’ll just make sure that moment with his buddy makes it into the tool kit.