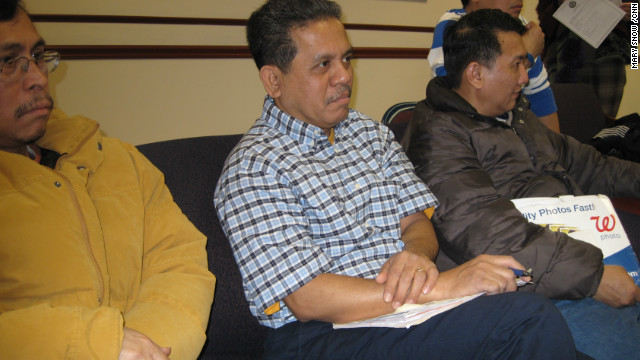 Saul Timisela (center) at Reformed Church of Highland Park, where he plans to stay until his immigration case is resolved.
March 20th, 2012
06:00 AM ET

(CNN) - A bed, space heater and a place to put his clothes are all Saul Timisela have in a room he calls home. But his new refuge inside New Jersey’s Reformed Church of Highland Park is the only thing that stands between him and deportation.

"I feel safe," says Timisela, who moved into a Sunday school classroom on March 1, when he defied an order to return to his native Indonesia. His wife has since joined him.   "All the members are so welcoming,” adds Timisela,  who says he’s prepared to stay in the church until his case is solved.

When and if that happens is a question mark. In the eyes of Immigration and Customs Enforcement, Timisela is an "immigration fugitive" who was "ordered removed" from the U.S. in 2006 but failed to leave. He says he was unaware of that 2006 order. He’s now inside a church, and it’s unlikely that immigration officials would raid it.

"As a matter of policy," ICE spokesman Harold Ort says, ICE "does not conduct enforcement actions at sensitive locations, including places of worship, without prior approval from ICE headquarters or unless the action involves a national security matter, imminent risk of violence or physical harm, pursuit of a dangerous felon or the imminent destruction of evidence in an ongoing criminal case."

As Timisela waits it out, he relies on Pastor Seth Kaper-Dale, who opened the church as a sanctuary. Kaper-Dale has personally taken up Timisela’s cause along with roughly 80 other Indonesians in his community facing deportation. He sees his church on the front lines of the battle over immigration reform.

"We have seen, in recent years, states taking immigration matters into their own hands due to the federal failures to make sense of immigration policy," Kaper-Dale says. "I think our church actions are like those state actions."

Kaper-Dale questions the Obama administration’s immigration policy in light of a memo issued last June directing the use of "prosecutorial discretion." It seeks to prioritize immigration enforcement, "to target criminal aliens and those who put public safely at risk, as well as those who threaten border security or the integrity of the immigration system," according  to a statement from ICE’s office in Newark, New Jersey.

Many Indonesians in his community, including Timisela, came to the U.S. on a tourist visa in the late 1990s. They left the predominantly Muslim country because, at that  time, Christians were being persecuted. After arriving in the U.S., they had a year to apply for asylum, but many say they weren’t aware of that. Their visas expired, and they lived here illegally.

And they came forward after the September 11 terrorist attacks because of a program called the National Security Entry-Exit Registration System, or NSEERS, which was discontinued last year.

Under it, foreign visitors, mostly from predominantly Muslim countries, were told to register with the government. Because Indonesia was on the list, the men came forward. Some, like Timisela, believed they were on a path to legalization.

That didn't happen. Instead, they put themselves on the radar of immigration enforcement. Kaper-Dale says he got involved after raids were carried out and deportation orders followed. Eventually, he and ICE worked out an agreement to allow undocumented Indonesians with no criminal record to live and work in the U.S. if they checked in regularly.

"To say now that they are a deportation priority, " Kaper-Dale says, "is for ICE to betray the Indonesian community and their American citizen advocates.”

But that's not the way ICE sees it. Immigration officials say it was made clear that the agreement wasn't an "amnesty-type program" and that it was done to give people  a final chance to reopen their immigration cases. They say ICE has extended stays and continues to do that in some cases, with factors like strong family and community ties taken into consideration.

Kaper-Dale says he's thankful that nearly half of the roughly 80 people facing deportation have been given stays of "somewhere between five and 12 months." But he says he’s not satisfied, adding that "there is nobody in our group who should be a deport priority for the U.S. government."

But immigration officials say they consider immigration fugitives an enforcement priority. And they put Saul Timisela in that category.

On a recent night at the church where he now lives, Timisela met with Kaper-Dale and about a dozen other Indonesians. More than half of them had electronic ankle monitors strapped to their left leg.

Kaper-Dale reviewed their status and went over checklists, one of which had a reminder to write to lawmakers. Kaper-Dale has been fighting to get a law passed in Congress that would give the Indonesians a second chance to apply for citizenship if certain requirements are met. But there's little appetite on Capitol Hill to take it on. Since that meeting, Kaper-Dale says, one of the men has been deported.

With deadlines approaching for other members of his community to leave the country, Kaper-Dale says "we will keep sanctuary as a real possibility" if warranted.