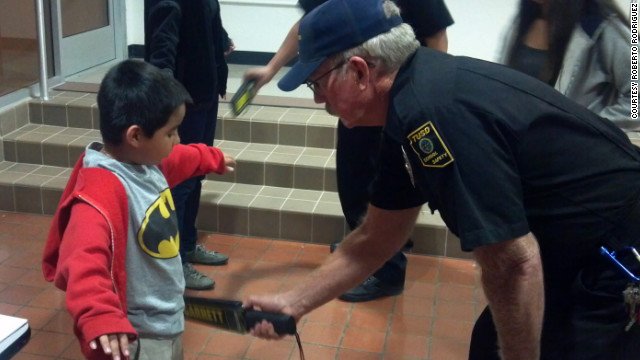 Nine-year-old Nicolas being checked by security as he entered a Tucson Unified School District board meeting on March 13.
March 30th, 2012
06:17 PM ET

Opinion: What is the Tucson school district afraid of?

Editor’s Note: Roberto Rodriguez is an assistant professor in the Mexican-American studies department at the University of Arizona. He blogs at drcintli.blogspot.com.

CNN's Thelma Gutierrez reported on this story for In America.  Her report is here.

By Roberto Rodriguez, Special to CNN

(CNN) - Look at the image above. For people who live outside of Tucson, Arizona, it evokes shock and even horror. For most of us here, it was but another day in Arizona.

On March 13, the day I took this photo, students from Tucson High School showed  up to the Tucson Unified School District board meeting, to once again air their support for the now dismantled Mexican-American studies department.

On May 3, 2011, I witnessed dozens of riot-equipped law enforcement officers treat Mexican-American studies supporters inside and outside of Tucson Unified School District headquarters as though they were potential terrorists. To get into the meeting, everyone had to pass through metal detectors. That evening, seven women, including two senior citizens, were arrested for attempting to speak before the school board.

All this happened because the week before, on April 26, nine students, tired of being given the run-around, chained themselves to the school board chairs in an effort to prevent the dismantling of the Mexican-American Studies department. All this was triggered by an unconstitutional 2010 state measure, HB 2281, which in effect, bans the teaching of ethnic studies.

In a state that is openly hostile to Mexicans, we are led to believe by the proponents of HB 2281 (who are the same proponents of the state’s anti-immigrant racial profiling measure, SB 1070), that it is they who are qualified to determine what constitutes unbiased history and that it is the Mexican-American studies department that promotes hate, segregation and plots the overthrow the U.S. government.

This is from the same man who characterizes maize knowledge – which forms the philosophical foundation of what is taught in Mexican-American studies – as un-American. Part of that foundation includes the teaching of the indigenous concepts of In Lak Ech (You are my other me) and Panche Be (to seek the root of the truth.)

Can there be anything more dehumanizing? We in Tucson do not dispute Horne’s contention that maize knowledge does not emanate from Greco-Roman culture. He is correct, however, there is nothing more American than maize and there is nothing wrong with teaching about the cultures that sprung forth as a result. Maize, incidentally, was created in Southern Mexico some 7,000 years ago and, has been in the U.S. Southwest for at least 6,000 years.

There are many other ugly images of Arizona, such as Lupita Garcia, an assistant superintendent in Tucson, telling the students who walked out in January in protest of the dismantling of Mexican-American studies in the Tucson Unified School District that, “this country is called America. O.K.? And they study U.S. history. If you were to go live in Mexico… you would study Mexican history.”

Nico Dominguez at a school board meeting being asked to take a seat.

Pay close attention to the image above. It is of Tucson High School student Nico Dominguez. After speaking at the school board meeting on February 14, 2012, he crouched next to his seat, rather than sit down. Two days later, he was yanked out of his classroom so that Tucson Unified School District security officers could show him the rule he violated that night. At the board meeting, he testified regarding the banning of the books associated with the Mexican-American studies curriculum. Books have been boxed, banned and stored in the district’s book depository, though the district denies it has banned any books.

That’s not even when the ugly images began. Last year, after the students took over the school board, a video was posted on You tube, inciting viewers to “shoot them in the head.” Typical of Arizona, the police determined that the video was but a joke. At the same time, I received three telephoned death threats at my university office.

These ugly images do not even include Gov. Jan Brewer wagging her finger at President Obama or Sheriff Joe Arpaio’s humiliating tactics and racial profiling raids, nor U.S. Border Patrol’s Operation Streamline, which sees some 70 shackled Mexican immigration detainees charged, tried, convicted and sentenced to private detention facilities – all within the span of one hour. Most offensive of all are the thousands of  bodies of migrants that continue to turn up all along the inhospitable border.

In Arizona, it is not the imagery that is offensive, but the reality that we live.

The opinions expressed are solely those of  Roberto Rodriguez.