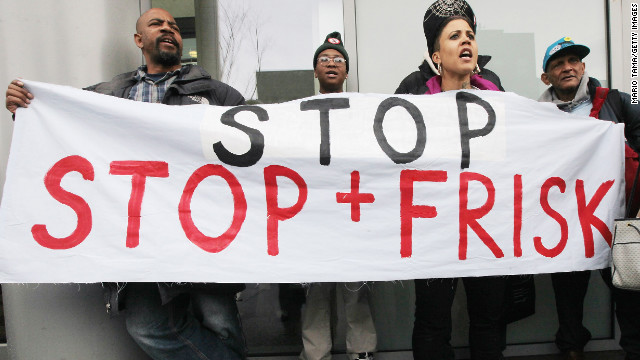 New York (CNN) – Every time a cop car slows down near him, Djibril Toure worries that he’s about to be stopped and questioned. Not because he did anything wrong - the 39-year-old businessman and activist was born and raised in New York, attended Cornell University and said he’s never committed a crime.

But New York police are allowed to stop and question anyone on the street if they have a reasonable suspicion that the person was involved in illegal activity, is about to commit a crime or is carrying a gun. The policy is known as “stop, question and frisk.” Close to 700,000 of the searches took place in New York last year, a record number.

Proponents say it’s an effective tool that has contributed to a historically low murder rate in New York. Critics say it’s racial profiling. More often than not, the people stopped are black or Hispanic males, according to New York Police Department statistics.

Toure, who is black, lives in Brooklyn’s Bedford Stuyvesant neighborhood, a predominantly African-American section of the city with a history of high crime rates. He said he’s been stopped and questioned by police more than a dozen times since the late 1990s, and he believes it’s because of the way he looks.

“I felt a combination of angry and humiliated,” Toure said. “There was no reason for them to stop me. I hadn’t done anything.

“Honestly, it makes young people mistrustful of the police. I think it makes them feel like the police are their enemy.”

A federal judge might soon decide whether New York City is taking that policy too far and violating the rights of minorities. Toure is among several men who filed a class-action lawsuit against the police, saying "stop, question and frisk” is a racist policy.

At a recent City Council hearing on “stop, question and frisk,” Police Commissioner Ray Kelly testified that 96% of shooting victims in New York are people of color and therefore, stopping and questioning suspicious individuals in minority communities is justified. He said about half of the stops actually result in a “limited pat-down” and only 9% result in a more thorough search.

“People are upset about being stopped, yet what is the answer?” Kelly asked at the hearing. “What I haven’t heard is any solution to the violence problems in these communities.”

City Council Member Peter Vallone Jr. said the number of black and Hispanic men stopped is justified because a majority of shootings in New York take place in minority communities. “Stop, question and frisk” takes about 800 guns a year off the streets, he said.

“We’re trying to get that gun before the shooting happens,” he said.

But Council member Jumaane Williams said "stop, question and frisk” is not achieving its goals. While the number of police stops has gone up during the past two years, there hasn’t been a corresponding drop in the number of shootings in New York.

“Communities are losing trust with the police, which is one of the biggest crime fighting tools that we have,” Williams said.

Delores Jones-Brown, a professor at John Jay College of Criminal Justice at the City University of New York, said the majority of people who are stopped are black, followed by Hispanics, then white people.

“Almost 90% of those stops do not result in an arrest or a summons being issued,” she said.

Jones Brown said that among the 10% of police stops that result in criminal charges, about 1% turn up a weapon.

“In the few cases where there are any arrests or summonses issued, we’re not finding weapons,” Jones-Brown said. “That means that innocent people who are primarily black and brown are being swept up in this policy as opposed to the object of the policy, which is to detect the guilty.

“Apparently the department is doing a very poor job of that.”

Toure said the policy is doing more harm than good.

“If you were to gain any benefit from the small amount of hand guns that you got off the street, you’re erasing that by the amount of mistrust, the amount of disharmony that is created in the community with that policy,” Toure said.