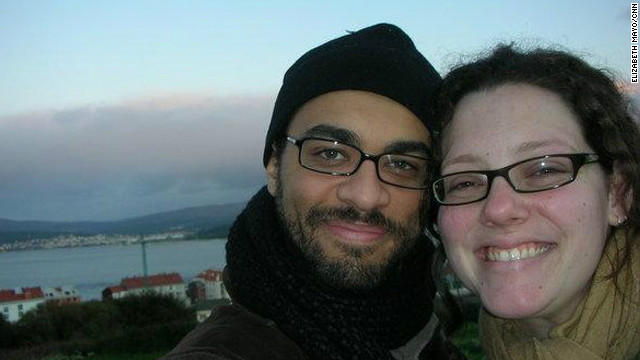 Despite her dad's objections, Elizabeth Mayo says she never considered breaking up with her future-husband, Alex Chancey.
April 5th, 2012
10:22 AM ET

Editor's note: Elizabeth Mayo is a digital producer for CNN's "Early Start" and "Starting Point." All this week, "AC360°" airs its special series "Kids on Race: The Hidden Picture" at 8 and 10 p.m. ET on CNN. Thursday's installment will focus on interracial dating.

(CNN) - It all started on my second date with Alex. It was 1997 and on a whim we went into Manhattan to see the ball drop on New Year's Eve in Times Square. The closest we could get was 55th Street and Seventh Avenue. That's pretty far away, but we could still see the glittering ball touching the sky. He was 19, I was 17.

For him, I was his childhood dream girl: I'm tall, have curly brown hair and I play cello, so I was the real-life version of Sigourney Weaver's character in "Ghostbusters" (his favorite movie). To me, he was smart, doting and hilarious.

On what had to be the coldest night in the history of the ball drop, we shivered next to each other waiting patiently, with a few thousand spectators, to get one year closer to the millennium. At midnight, the ball dropped and the crowd erupted.

We looked at each other in anticipation and we kissed. Fireworks went off. Literally, behind us in Central Park fireworks set the sky ablaze to commemorate the 100th anniversary of the five boroughs constituting New York City. And when the heck did that saxophone player show up playing "Auld Lang Syne"? We took this only-in-the-movies moment as a sign from the universe that we were meant to be together.

There was one problem: Alex is half-black. I am white, half-Spanish in fact.