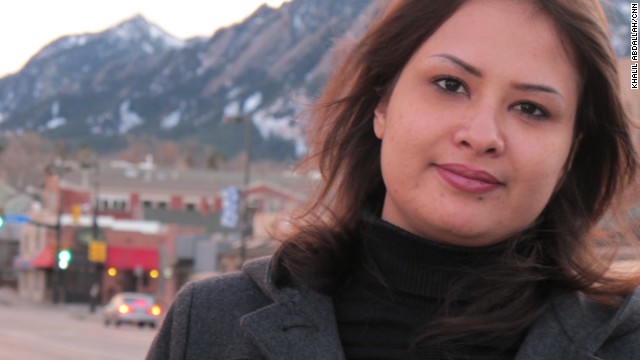 A year after Eman al-Obeidi stormed into Tripoli's Rixos Hotel, screaming of gang rape by Gadhafi's thugs, she is in Colorado.
April 9th, 2012
05:00 AM ET

A symbol of defiance in Gadhafi's Libya, now in Colorado

Denver (CNN) - The caller ID on Eman al-Obeidi's smart phone says private number. She guesses the call is from a fellow Libyan and promptly silences the ringer.

"I think the halal meat seller gave out my number," she says, picking up another piece of sizzling beef fajita. "That's why I don't buy halal meat anymore."

If only that were enough to lose the gossip that follows her, even in her new home far away from the native land she fled. Her fellow Libyans are her harshest judges.

The world knows her as the Libyan woman who stormed into Tripoli's Rixos Hotel a little more than a year ago in March, screaming of gang rape by Col. Moammar Gadhafi's thugs.

In that moment of utter defiance, splashed on television screens everywhere, she became a face of the Libyan revolution, her heroism a source of inspiration for men and women fighting a longtime tyrant. Some even said she was to Libya what Mohamed Bouazizi, the fruit vendor who set himself afire, was to Tunisia's revolution. A few weeks ago, Newsweek magazine included her on its list of 150 fearless women.

Al-Obeidi drew sympathy and fame, her image painted for the public on a canvas of courage.

Now, in the foothills of the Colorado Rockies, she says she craves anonymity.