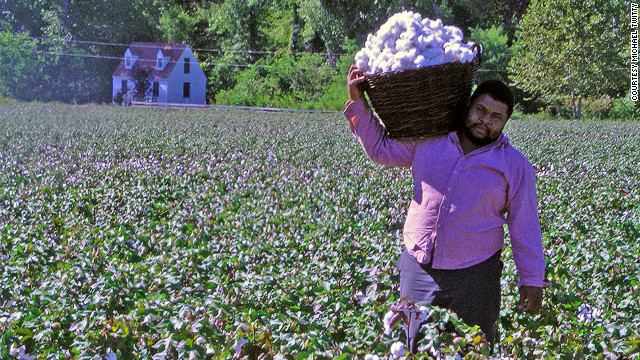 Michael W. Twitty is a culinary historian, living history interpreter and Jewish educator from the Washington D.C. area.
May 1st, 2012
06:00 AM ET

The cook who picks cotton: reclaiming my roots

Chefs with Issues is a platform for chefs, writers and farmers we love, fired up for causes about which they're passionate. Michael W. Twitty is a culinary historian, living history interpreter and Jewish educator from the Washington D.C. area. He blogs at Afroculinaria.com and thecookinggene.com. As the originator of the Cooking Gene Project, he seeks to trace his ancestry through food.

(CNN) - Edward Booker, Hattie Bellamy and Washington Twitty didn’t know what an organic farm was, but nearly everything they ate was organic. They enjoyed wild caught, sustainable fish; they were no strangers to free range chickens, and they ate with the seasons with almost nothing originating more than a mile or two away from their cabin door. They had gardens, composted, and ate no processed foods. Their food was fairly simple, often meatless; and it was a fusion cuisine, with ingredients drawn from five continents.

They were not culinary revolutionaries living out of the foodie playbook – they were three enslaved individuals living among the over 4 million held in bondage before the Civil War, and they were my ancestors.

In the upcoming months I will return to the fields, forests and waterways of the Old South in search of my culinary version of Roots, tracing my family tree through food from Africa to America and from slavery to freedom. The project is called The Cooking Gene: Southern Discomfort Tour.

Slavery is not just a practice or moment in American history; it is a metaphor for our relationships to lifestyles and food systems that many of us view as beyond our control. Most of us are enslaved to food systems that aren’t sustainable, but eat we must. And because we must eat, food is a natural vehicle for telling the kinds of stories about historical slavery and the impact of “race” on how we eat, even as we critique and question our contemporary food politics. Food is our vehicle to move beyond race and into relationships and use those relationships to promote the kind of racial reconciliation and healing, our nation desperately needs.