There are nearly 2 million people with amputations in the United States, according to statistics from the Amputee Coalition, a nonprofit group that serves people who lost a limb. About 185,000 amputations are performed each year and many removed limbs are replaced by prosthetics.

A new generation of prosthetics, particularly those for lower limbs, means that an amputee can revel in the label of “that person with the awesome chrome leg” instead of “that disabled person who lost a leg.” These limbs, while restoring physical functions like walking or standing, also offer amputees the chance personalize and accessorize in the same way that a fashionista might change hair color or shoes, or an athlete might change from hiking boots to running shoes. They’re made to inspire a sort of envy rather than pity.

For most of modern history, prosthetics were used to mimic the shape and appearance of a lost limb. In the last century, the contraptions of wood, ivory and steel gave way to rubber and various plastics that tried to replicate human skin tones and textures. But many seemed not so real as transparently artificial, descending further into the “uncanny valley,” a robotics term that describes what makes humanoid robots creepier than their full-metal cousins.

Now, technological advances and new attitudes toward what constitutes a disability have enabled a wider view of what prosthetics can look like.

Peggy Chenoweth, 36, had her left foot and ankle amputated after her foot was crushed by a falling computer monitor in 1998. For five years, she lived with numerous surgeries, infections and pain as doctors tried to restore the foot’s function. Deciding to amputate and replace it with a prosthetic was the hardest decision she ever had to make, Chenoweth said.

“I was initially afraid of the pain of the actual surgery, then afraid I wouldn’t be able to use the prosthetic,” Chenoweth said. “I thought I would end up be a totally different person. I thought that what I had dreamed for my life was never going to happen because I didn’t have my foot.”

But Chenoweth has gone on to a happy and full life with her 5-year-old son, Robby, and husband, Scott. She’s gone rock climbing, participated in a run for breast cancer, and trains for a triathalon. She’s an active blogger and social media manager and volunteer in her son’s classroom. 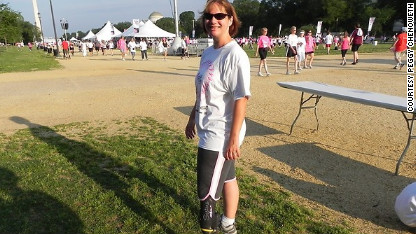 Chenoweth customized her running leg to read "sisters" when she did a breast cancer survivors' run – she and her sister both beat breast cancer.

For the first few years after getting her prosthetic in 2003, Chenoweth always covered up the metal and plastic components with a flexible cover made to imitate the look of skin. But her current one has metal raindrops tattooed over the plastic socket – a look which has bolstered her confidence in her body image.

“I went through a few years of trying to match – it was so important to me for it to look like the other leg,” Chenoweth said. But “it’s not my other leg, and that’s OK.  I haven’t gone back to the cosmetic covers.”

Chenoweth also has a carbon fiber leg that she decorates with Christmas lights for the holidays. Robby loves using stickers to give it a personal touch.

“People are going to look at it anyway, so I might as well make it an expression of who I am,” Chenoweth said.

Bespoke Innovations, a company that makes custom, 3-D printed panels for prosthetics called fairings, is one company seeking to facilitate the desire for self-expression. Industrial designer Scott Summit founded the company in 2010.

Bespoke Fairings – the panels the company produces – are designed to bring to mind a luxury concept car or the pattern of sunlight beaming through tree leaves. They can be made of polymer, ballistic nylon, leather or chrome, and their shape restores some of the contours of the lost limb.

Summit said he’s seen dramatic changes in the way amputees saw themselves and their limbs before and after being fitted with fairings.

“We saw one woman who was very introverted, suddenly become very outgoing in the larger world,” Summit said. “She started wearing skirts when she hadn’t been announcing to the world previously that she had been an amputee at all. It became more akin to wearing beautiful Italian leather boots instead of a prosthetic in the traditional sense with a bunch of pipes and fittings and mechanical couplings.”

Bespoke Fairings have the look of luxury, and right now they cost $4,000 to $6,000 per panel; that's separate from the price of the actual prosthetic, which can range  between $5,000 and $50,000. Summit hopes that cost goes down as technology improves and becomes less expensive. So far, the San Francisco-based company has produced about 100 fairings.

Nobody chooses to lose a limb, but having a choice about how the world sees you afterward is essential, said Mullins, the athlete and model.

“It’s absolutely essential to the role of identity in this – we absolutely have to chose our own, and make and remake,”Mullins said. “That liberation that comes from abandoning the need of having to look like everybody else is something I wish for everybody.”