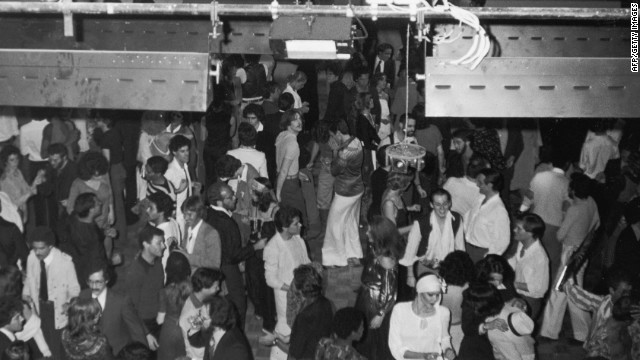 Writer Jeffrey Sharlach remembers when the gay community felt like an "elite group" at venues like Studio 54.
May 9th, 2012
05:00 AM ET

Opinion: Coming out now is nothing like coming out then

Editor’s note: Jeffrey Sharlach is an author, businessman and faculty member at NYU Stern School of Business. His novel, “Running in Bed,” about a gay man who finds love in the 1970s, was published this month by Two Harbors Press.

By Jeffrey Sharlach, Special to CNN

(CNN) - I often listen in awe to the stories from young gay people about their experiences being out in high school or junior high, how they went with a same-sex partner to the prom and celebrated after graduation with their gay and straight friends together. When I graduated high school in 1971, I didn’t know even one openly gay person, including myself.

Certainly, even today, many queer youth still struggle with accepting their sexual identity and one doesn’t need to search the news very diligently to come across heartbreaking stories of bullying and family rejection. But more and more, we’re seeing scenes of out and proud young people at earlier ages.

It’s probably difficult for people born in the last two or three decades to imagine the shame and revulsion once foisted upon gay people by society, government policies and especially the media. I came out in the 1970s, at age 24, and that was the most exciting experience in my nearly 60 years. The exhilaration of finally accepting myself for who I was has never been equaled.

My introduction to homosexuality came around age 6, from my mother, warning me to be careful when I had to use the men’s room at Grand Central Station when we took the train in from Connecticut for the day.  And why wouldn’t she warn me? The only homosexuals anyone ever read about in the news were the ones arrested for molesting boys, having sex in public bathrooms, or both.

The rare homosexual who turned up in television or movies was a tragic character, usually put out of his misery with an early death. We never saw or heard about gay doctors, gay lawyers, gay politicians, or anyone gay who had accomplished anything in life.

I remember furtively looking up the word “homosexual” in the encyclopedia at the school library, carefully covering the page with my hand in fear that someone passing by might see what I was reading. I don’t remember what the encyclopedia entry said but in researching my novel, “Running in Bed,” I tracked down excerpts from the very popular 1970s bestseller, “Everything You Always Wanted to Know About Sex (But Were Afraid to Ask).”

I remember buying a copy of during my freshman year of college. The author, a doctor named David Reuben, explained in question-and-answer format that homosexual encounters were generally impersonal bathroom sex, where guys exchange notes on toilet paper and then go at it. "No feeling, no sentiment, no nothing." Another question: "But all homosexuals aren't like that, are they?" Yes, he answered, "unfortunately, they are just like that."

That was enough to stoke my self loathing to keep me in the closet all through college and continuing through law school.

One of the first things I did when I came out just months after graduation was to toss that book in the trash – and nearly all of the friendships I had. Not because any of these long-time friends dropped me once they found out I was gay; I never gave them that chance.  I was embarrassed to admit my lies and deception, all my pretending to be straight. Although I’m not sure how many of them I actually convinced over the years, one has to remember how much easier it was in those days.  Anyone who had watched TV would have thought all homosexuals minced around with limp wrists and high voices - that is, when they weren’t parading around in all-out drag.

I came out at work, in my job at a big international PR agency, and it wasn’t long before I was “adopted” by the older cadre of gay execs, most of them completely closeted, living in the suburbs with wives and kids.  When a major cosmetics client kept complaining, they decided a young gay account executive was just what he needed and I got a major promotion, and gained some long-time friends.

It was still the love that dare not speak its name so we had our code words in addition to the furtive glances. In business, the universal expression was “Are you a friend of Dorothy?” which I suppose originated with the traditional gay attachment to Judy Garland.

I felt like part of a privileged elite group.  In New York, we basked in the collective glow of that decade after Stonewall. Gay bars and clubs were suddenly visible. Studio 54 was the place to be and no, the bartenders in their silver lamé shorts were not straight. Harvey Fierstein’s “Torch Song Trilogy” had just opened off-Broadway. Richard Gere, the hottest movie star of the moment, starred on Broadway as a gay man in the drama “Bent.”

So now we have our gay lawyers, doctors, and congressmen. The media don’t dare portray a negative stereotype, lest the Gay & Lesbian Alliance Against Defamation starts holding news conferences and organizing protests.  Gays can serve in the military, something that someone who came of age during the height of the Vietnam War protests, like me, appreciates the symbolic importance but can’t understand why they’d want to enlist. I fully expect gay marriage to be the law of the land in my lifetime.

For all the gains and the fervent hope that we’ll keep moving forward and not backward, I can’t help but be a little nostalgic for those heady days after I came out in the late 1970s. I doubt any from my generation would choose to return to those days, but I still look back fondly on the momentous gravity of the time of my "coming out" and how it shaped the man I've become today.

The opinions expressed in this commentary are solely those of Jeffrey Sharlach.