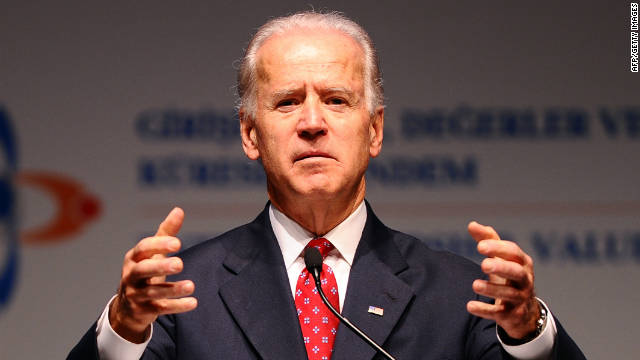 Vice President Joe Biden recently made comments that he is comfortable with same-sex marriage.
May 9th, 2012
10:16 AM ET

Opinion: Vice President Biden is out of step with voters’ will on marriage

Editor's note: Tony Perkins is president of the Family Research Council, a public policy organization based in Washington, D.C.

By Tony Perkins, Special to CNN

(CNN) - “Establishment” figures in both political parties insist that this year’s presidential election is all about economic issues, but if the Republican primary surge of Rick Santorum did not make clear that social issues matter, then recent events should.

First, Vice President Joe Biden told NBC’s David Gregory on “Meet the Press” that Republicans “need a better social policy than taking the social policy back to the ‘50s.”

Taking the bait, Gregory asked if Biden’s views on same-sex marriage have “evolved,” the term President Obama has used for his position on the issue.

Biden responded that, “What this is all about is a simple proposition: Who do you love?”

When news reports declared that Biden apparently had endorsed same-sex marriage, the White House moved quickly to backtrack, declaring that he only meant same-sex couples should have the same legal rights, possibly through “civil unions,” the position staked out by President Obama.

Obama’s ostensible opposition to same-sex marriage is so thin as to be invisible, because he opposes all methods of preventing it.

However, the immediate move to clarify after Biden’s remarks showed that the president understands what many of his supporters still do not: that open support for same-sex marriage remains a losing position in mainstream American politics.

That should be obvious from the fact that a majority of states have already passed state constitutional amendments to define marriage as the union of one man and one woman.

In every state where marriage has been on the ballot in some form (32 in all), voters have ultimately rejected the same-sex marriage position.

North Carolina’s passage of a similar amendment on Tuesday shows that in the only poll that counts, a secret ballot on Election Day, voters still resoundingly reject the redefinition of marriage.

Minnesota will be voting on a marriage amendment in November, and activists in the states of Maryland and Washington are working to give voters a chance to exercise a “people’s veto” over the redefinition of marriage by their legislatures.

Now that Vice President Biden has sent a clear signal as to what marriage policy would look like under a second Obama administration, Mitt Romney should respond with a contrast by promising that on Day One of his presidency, he will reverse the Obama Justice Department’s position in several lawsuits challenging the federal Defense of Marriage Act, and resume a vigorous defense of that law.

The Defense of Marriage Act defines marriage as the union of one man and one woman for all purposes under federal law, and prevents states from being forced to recognize same-sex marriages from other states.

Interestingly, one of the 85 senators who voted in favor of the act, when it was passed in 1996, was Vice President Joe Biden.

Why has he now changed his mind about same-sex marriage?

Biden said on “Meet the Press,” “I think ‘Will and Grace’ probably did more to educate the American public than almost anything anybody’s ever done so far.”

It is odd, to say the least, for a vice president of the United States to shape public policy on marriage based on a situation comedy about a homosexual man and heterosexual woman who live together.

No wonder that most Americans think Washington is in the “Twilight Zone!”

The opinions expressed in this commentary are solely those of Tony Perkins.