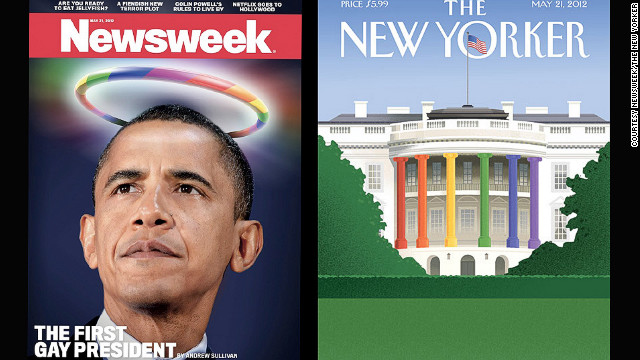 The covers of Newsweek and The New Yorker take note of President Barack Obama's support of same-sex marriage.
May 14th, 2012
04:30 PM ET

A Newsweek magazine cover bestowed that distinction on Obama this week with a picture of the president and a rainbow halo. If you view that as a naked attempt to grab your attention, capitalize on the moment and have you pick up a newsmagazine, you might be right.

But that illustration – along with a New Yorker cover showing the columns of the White House lit up in rainbow colors – certainly shows how the president’s public support of same-sex marriage has pushed the issue back into the spotlight.

The magazines’ choices also speak to the broad cultural impact of Obama's announcement and pose questions about whether this moment may become a lasting part of his legacy.

That's not to say the president's announcement is necessarily a watershed moment. It earned him kudos and criticism despite the fact that he left the legal standing of same-sex marriage in the hands of the states and made no policy changes.

The issue also is far from resolved in the African-American community, and some conservatives say Obama's announcement comes at a political cost.

CNN.com's John Blake writes that some suggest the black church may punish Obama for announcing his support for same-sex marriage.

As millions went to church this weekend after the president's announcement, clergy across the country offered their opinions, with the words of black pastors – a key base of support for Obama in 2008 – carrying special weight in a presidential election year. But black pastors were hardly monolithic in addressing Obama's remarks.

Read the full story on CNN's This Just In blog